Khan Sir, man behind Bihar students' agitation who no one knows 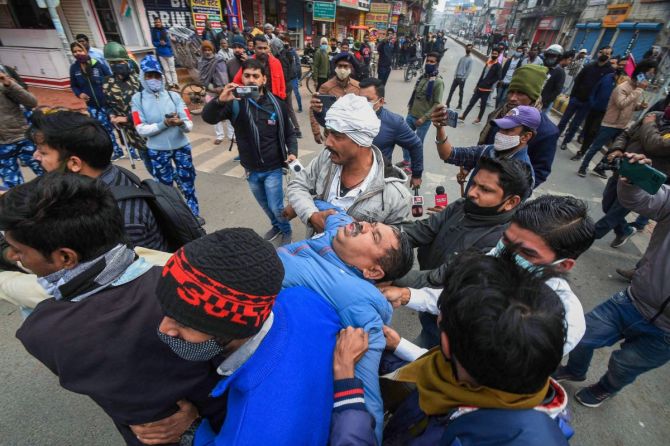 Patna-based tutor and YouTuber, Khan Sir has been in the eye of a storm for allegedly inciting student protests against the format of tests being conducted by the Railway Recruitment Board for a bunch of jobs called Non-Technical Popular Categories (RRB-NTPC).

Khan Sir is famous for coaching for various competitive examinations using YouTube and digital media to reach out to students. He also runs a popular coaching centre in Patna by the name of 'Khan GS Research Centre' and is famous for his unique teaching style.

He has never revealed his real name and most people know him by just the short sobriquet -- Khan Sir.

Earlier, some people claimed on social media that his name was Amit Singh. However, some also claimed that his name is Faisal Khan and he was a resident of Gorakhpur in Uttar Pradesh.

The FIR against Khan Sir and others was registered on the basis of statements given by agitating students who were detained on Monday and Tuesday in Patna.

They purportedly said they were motivated to participate in violent protests after a video, in which Khan Sir allegedly instigated students to agitate on the streets if the RRB NTPC exams were not cancelled, went viral on social media.

The FIR stated that on the basis of statements and video clippings accessed by the police, it was evident that "agitating students along with coaching institute owners plotted a conspiracy to carry out large-scale violence in Patna to threaten law and order".

The job aspirants had blocked the New Delhi-Kolkata main railway tracks and some others protested in Bihar's Arrah and Sharif railway station. Hundreds of angry protesters also allegedly set ablaze a train in Bihar's Arrah.

After the violence broke on Monday, Khan Sir apparently released a video appealing to students to carry out their protests in a peaceful manner.

He said that if they turned towards violence, no one would support them.

Khan Sir, along with other teachers, released another video on Thursday and told the students that there was no point protesting as the Union Railway Minister Ashwini Vaishnaw has already assured that there would be no second examination for those who have applied for Group D posts, and the results of RRB NTPC-CBT-I would also be revised.

Khan Sir was seen quoting a tweet of former Bihar Deputy CM Sushil Kumar Modi in which the latter talks about his conversation with the Union railway minister.

The result for the RRB-NTPC exam 2021 was announced on January 15. These protests soon took a violent turn as the candidates squatted on railway tracks, set a train on fire and pelted stones at different places in the state.

The railways also said that all students  found  involved in vandalism and unlawful activities during these protests shall be barred from future recruitment.

However, before the FIR was registered against him, the YouTuber had told media persons that ”he should be arrested if he has a role to play in the violence that unfolded during these protests”.

Khan Sir is not new to controversy. Before this, many controversial video clips of his have gone viral.

Recently, he released a video explaining possible 'security lapse' during Prime Minister Narendra Modi's January 5 visit to Ferozepur in Punjab. He had said in his video, ‘The PM's convoy took the road to the National Martyrs Memorial in Hussainiwala since weather conditions did not allow his chopper to take off. The incident was a big security lapse as protestors were given access to the PM's route while the route clearing team of security personnel gave assurances to SPG that the route is clear’.

He also held senior officials of the SPG  responsible and said it was a major lapse to allow the PM's cavalcade to remain halted on a flyover for nearly half an hour. He sought to know what stopped the NSG from reversing the cavalcade from the spot which was a vulnerable flyover near the Pakistan border.

Last year, he had grabbed the limelight for his video on France-Pakistan relations. In the video, Khan Sir was allegedly seen making an Islamophobic statement while talking about mass protests that took place in Pakistan between April 11 and 20. This debate had sparked social media speculation about his real identity.

Manjhi on Thursday said that such a step can further intensify the students' agitation. ”FIRs against teachers like Khan Sir could provoke students for more  undeclared agitations in Bihar. The time has come for the governments to talk on unemployment and come-out with a solution,” he said.

Similarly, Jan Adhikar Party leader Pappu Yadav also came support of Khan Sir and said the oppression of students and teachers must stop. He said, "It is unfortunate that teachers are being targeted in the RRB-NTPC agitation case.”