A violent group of Khalistani separatists has desecrated Mahatma Gandhi's statue outside the Indian embassy here in the United States during a demonstration by Sikh-American youths in support of farmers protesting against the recently enacted agriculture laws in India. 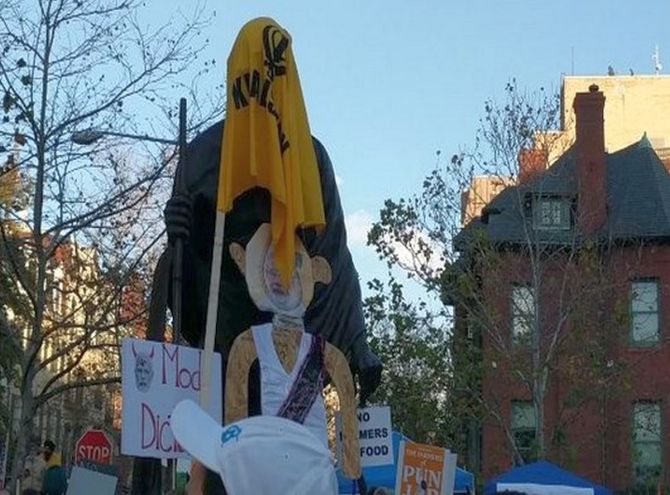 The Indian embassy condemned the “mischievous act” by hooligans masquerading as protesters.

"The statue of Mahatma Gandhi at the Mahatma Gandhi Memorial Plaza in front of the embassy was defaced by Khalistani elements on 12 December 2020. The Embassy strongly condemns this mischievous act by hooligans masquerading as protesters against the universally respected icon of peace and justice,” it said in a statement.

The Washington DC Police and Secret Services had a sizable presence when all this happened on Saturday afternoon.

Around half-an-hour later, another group of Khalistan supporters hung a dummy of Prime Minister Narendra Modi's picture with a rope around the neck of the statue.

After more than an hour, a secret service agent was seen coming near the statue and apparently telling the youths that they were violating the law by indulging in vandalism.

On June 26, US President Donald Trump had signed an executive order, according to which an individual can be imprisoned for up to 10 years for destroying, damaging, vandalizing or desecrating a monument, memorial, or statue within the US or otherwise vandalises government property.

Thousands of farmers are currently staying put at Delhi's borders with Haryana and Uttar Pradesh in protest against the Farmers' Produce Trade and Commerce (Promotion and Facilitation) Act, 2020, the Farmers (Empowerment and Protection) Agreement on Price Assurance and Farm Services Act, 2020 and the Essential Commodities (Amendment) Act, 2020.

They have expressed apprehension that these laws would pave the way for the dismantling of the minimum support price system, leaving them at the "mercy" of big corporations.

There have been multiple rounds of talks between representatives of the protestors and the government but the logjam continues.