Leading South Asia experts, who have interacted closely with Senator John F Kerry, the chairman of the powerful Senate Foreign Relations Committee -- whose nomination as the new secretary of state to succeed Hillary Clinton is expected to be announced shortly by President Barack Obama -- have hailed the pending appointment and predicted that he would be catalytic toward further advancing US-India relations.

Kerry's nomination has become a veritable no-brainer after Obama's widely-rumored first choice to succeed Clinton. United Nations Ambassador Susan Rice withdrew from consideration last week after she was pilloried by Republican Senators who had warned that they would block her confirmation after her comments on the Benghazi fiasco.

Jonah Blank, till recently policy director for South Asia on the majority staff of the senate foreign relations committee and key advisor to Kerry, told rediff.com, " Kerry's diplomatic skills are second-to-none.  He's got the patience, the experience, and the knowledge-base to represent the nation's interests deftly throughout the world."

"Kerry brings gravitas and a personal familiarity with global leaders that few other potential Secretaries can match.  He'll be ready for the job from Day 1."

Blank observed, "One of the most important tools in Kerry's diplomatic kit is his ability to speak to foreign leaders as one politician to another.  He can grasp the political needs and challenges of presidents and prime ministers, in a way nobody who hasn't had to face an electorate could truly appreciate."

Speaking specifically to Kerry stance toward India, Blank asserted that "John Kerry can be expected to be a strong champion of the US-India relationship," and pointed out that " was one of the key movers behind passage of the civil nuclear deal, and consistently supported India on issues ranging from counterterrorism to increased economic engagement."

He took strong exception to the contention by some critics, particularly in New Delhi that Kerry isn't tough on Pakistan, especially for the Inter-Services Intelligence-sponsored terrorism through proxies such as Laskhar-e-Tayiba and hasn't strictly conditioned aid to the Pakistan on Islamabad's genuine efforts to clamp down on its terror proxies.

Blank even went to the extent of painfully giving the exact legislative amendment, mentioning that it was Section 203 (c) (2) (B), if any of Kerry's critics in New Delhi wanted to look it up.

Blank's sentiments were echoed by Karl F 'Rick' Inderfurth, former Assistant Secretary of State for South Asia during the Clinton administration, who told rediff.com that "There are three very good reasons why India should welcome Senator John Kerry as the next US Secretary of State."

"First, he is a true 'FOI' -- Friend of India. He 'gets it' about India's emergence as an Asia-Pacific and global power -- and that this is in America's interest," he said.

Inderfurth added "Senator Kerry was also a strong supporter of President Obama's endorsement of India to become a permanent member of the UN Security Council, and in fact, his exact words were that 'The UN must reflect the realities of the 21st century, and one of those realities is India's unquestioned global stature.'"

"Second, Senator Kerry knows a great deal about India's neighborhood -- especially Pakistan and Afghanistan -- and the challenges these two countries present.  He has conducted a number of sensitive missions on behalf of the president to Islamabad and Kabul meeting with key leaders, all of which will allow him to 'hit the ground running' when he steps into his office on the 7th floor of the State Department."

Kerry's most recent specific statements about how he feels about Washington's relations with India was when he convened confirmation hearings for President Obama's nominee to be the US Ambassador to India Nancy Powell on February 7 this year.

In his opening remarks, Kerry said, "We are really pleased to have this opportunity to discuss what is without doubt one of the most significant partnerships in US foreign policy. There are fewer relationships that will be as vital in the 21st century as our growing ties with India and its people."

He said, "On all of the most critical global challenges that we face, India really has a central role to play. And that means that Washington is going to be looking to New Delhi not only for cooperation, but increasingly for innovation, for regional leadership. India's growing significance has been clear to many of us for some time now."

Kerry recalled how "in the 1990s I traveled to India -- took one of the first business trade missions right after the economic reforms were first put in place -- and I've been there many times since. And President Obama, immediately upon entering office, invited Prime Minister Singh to be his guest at the very first state dinner. Secretary Clinton has visited India twice. And both countries inaugurated the US-India Strategic Dialogue two years ago."

"Republicans and Democrats alike understand the need to capitalize on the democratic values and strategic interests that our two countries share. And that is why it is important that we work together every day -- as I believe we are right now -- to further cultivate the relationship."

Stating that Powell "is one of our best and it is only appropriate that she be tasked with one of the State Department's most important postings," Kerry said, "I think Ambassador Powell would agree with me that the US and India interests and values are converging today as perhaps never before. And consequently, America is an interested stakeholder in India's increasing ascent to greater economic and greater global power and participation."

"India's economy is projected to be the world's third largest in the near future. And total trade between our countries reached $73 billion in 2010 and could exceed $100 billion this year. On defense, our security cooperation has grown so dramatically that India now conducts more military exercises with the United States than any other country."

Over the years, Kerry has also been familiar with Indian American community, both in his own state with close friends and longtime fundraisers like Ramesh Kapur, and also across the country, where he has been hosted several times by Indian American community groups and been the beneficiary of their largesse toward his campaign coffers, including during his president run, when he also granted an exclusive interview to India Abroad, the leading Indian American newspaper,  headquartered in New York and owned by rediff.com  -- the only interview he did with a South Asian American newspaper. 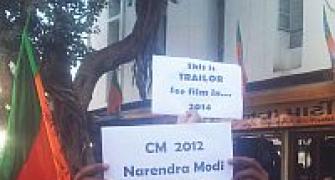 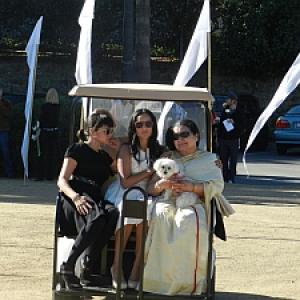 Pt Ravi Shankar's ashes to be taken to Varanasi

I will surely go to Delhi: Modi tells Gujarat