While voting in Kerala, Tamil Nadu and Puducherry for their single-phase election will start and end on Tuesday, West Bengal is set for its third phase, and has five more phases to go.

Assam, on the other hand, will witness the final of its three phases. 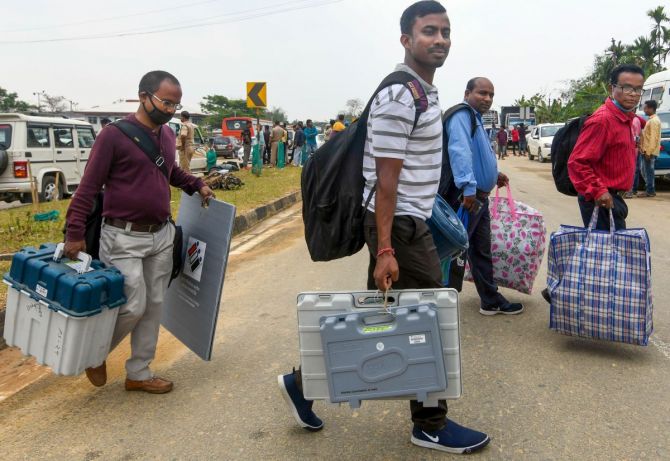 The most intense in its electoral history and the first polls in the absence of stalwarts, AIADMK's J Jayalalithaa and DMK's M Karunanidhi, Chief Minister K Palaniswami, who is seeking a third successive win from Edappadi segment in his home district of Salem, steered his party's hectic campaign.

As many as 13 candidates, including BJP's Pon Radhakrishnan and Vijay Vasanth of Congress are in the fray for the bypoll to the Kanyakumari Lok Sabha seat. 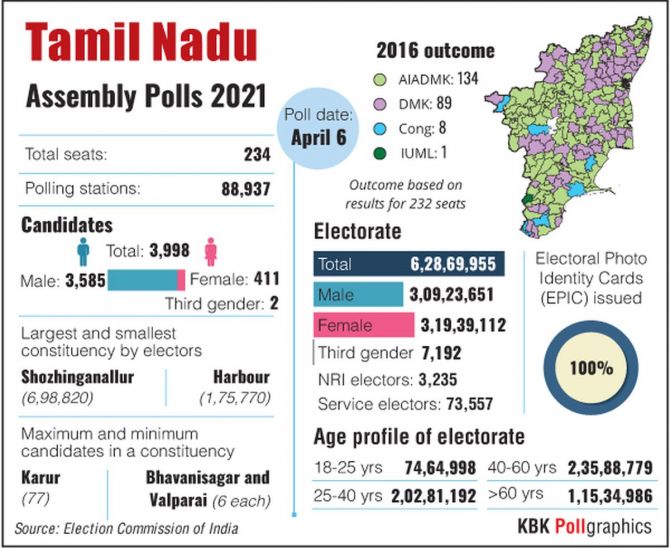 The AIADMK leadership that began the campaign in December last, latched on to government's 'achievements' like 7.5 per cent quota for government school students in medical admissions, successful COVID-19 management and poll promises like Rs 1,500 monthly assistance to families.

The DMK's poll plank was corruption charges against the government and 500 plus poll promises, including Rs 4,000 relief to COVID-19 hit rice ration card holders and legislation to earmark 75 per cent of jobs for locals.

DMK chief M K Stalin, who spearheaded several campaign programmes against the ruling party, including the 'We Reject AIADMK' in December last and 'people's' gram sabhas, vigorously toured the state to take on the ruling AIADMK.

He is seeking reelection for the straight third term from Kolathur segment in Chennai.

For the first time, Makkal Needhi Maiam, founded in 2018 and led by actor-politician Kamal Haasan, is trying its luck in assembly polls.

AIADMK's ally, Bharatiya Janata Party which is contesting in 20 constituencies, has made a serious bid to make a mark in the assembly polls.

Currently, the BJP has no MLAs in the assembly.

Congress leader Rahul Gandhi toured Tamil Nadu with zest and covered many regions to woo voters, targeting the BJP for not 'respecting' Tamil culture and its ally, the AIADMK leadership, for 'bowing' before the Centre.

Haasan is trying his luck from Coimbatore South, while BJP's state unit president L Murugan and the saffron party's Kushbhu Sundar are contesting from Dharapuram and Thousand Lights constituencies respectively.

Another AIADMK ally PMK is contesting from 23 constituencies and is pinning its hopes on measures like the 10.5 per cent internal reservation for Vanniyars, a Most Backward Community.

The Desiya Murpokku Dravida Kazhagam, which walked out of the AIADMK alliance over not being alloted the number of seats it sought, is fighting the polls in alliance with AMMK.

There are 234 assembly constituencies which goes for a single phase polls on Tuesday.

As the high-octane public campaign drew to a close last night, the southern state is now witnessing silent electioneering in which candidates and party workers are busy visiting homes and institutions to seek votes at the last minute.

An array of ministers and several sitting MLAs from both the traditional coalitions the Communist Party of India Marxist-led Left Democratic Front and the Congress-headed United Democratic Front are seeking another term in the April 6 polls. 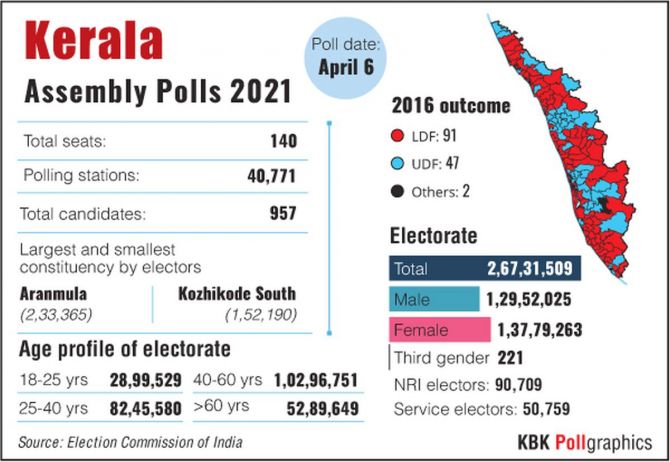 The April 6 poll is equally significant for Kerala Congress (M) chief Jose K Mani who recently snapped decades-long ties with the UDF and joined hands with the Left front.

It would be a litmus test especially for Congress leader Rahul Gandhi personally as he had camped in the state for several days and taken part in dozens of corner meetings and rallies across Kerala to campaign for the UDF.

The ruling LDF is hoping to retain power for a second consecutive term breaking the state's four-decades-old trend of alternating between the UDF every five year.

While the UDF is all confident to form their government when the results are out on May 2, the BJP-led NDA is leaving no stone unturned to garner maximum number of seats to become a decisive force in the state's rule.

Since the Election Commission of India announced the poll dates on February 26, Kerala had been witnessing unprecedented competitive spirit between all the three political fronts-from carrying out maximum number of rallies and meetings to bringing in all possible national leaders to woo the voters.

The topics of faith, religion, development and welfare have taken a centre-stage throughout the campaigns.

The state witnessed how the ruling LDF strived hard to bring focus of the poll debate on the agovernment's achievements in the development and welfare fronts in the last five years and its much celebrated COVID-19 and flood management.

But, the Congress-UDF and BJP-NDA have tried their best to make a topic of discussion the Sabarimala women entry issue and the controversial gold and dollar smuggling cases, in which the Chief Minister's office, Speaker P Sreeramakrishnan and some other ministers were facing allegations.

The LDF, who projected themselves as the sole saviour of minority communities especially in Muslim-dominated Malabar (north Kerala) districts during the campaign, is calculating that their votes would be consolidated en-mass in their favour.

They also accused the Congress of adopting a soft stand towards the Hindutva agenda to pick a hole in their vote-bank.

The Congress was seen reaching out to prominent figures and institutions related to Hindu, Christian and Muslim religions to ensure their support.

Besides wooing the majority community votes by promising a law to check 'love jihad' and protect the tradition of Sabarimala, the BJP also tried to reach out to the Christian community during the campaign.

Many national and state leaders of the saffron party could be seen meeting the cardinal, bishops and church leaders during the period.

Since the 1980s, the LDF and UDF have alternatively formed the government with neither able to gain back-to-back victories in Kerala.

If the ruling front can manage to buck the trend in the state this time, it will be history.

A three-cornered battle is on the cards in 31 assembly seats that are set to go to polls on Tuesday in the third phase of Bengal elections, with the Bharatiya Janata Party seeking to breach Trinamool Congress fortresses, and Left Front-Indian Secular Front-Congress alliance hoping to make a mark in areas, where identity politics has gained ground.

More than 78.5 lakh voters are eligible to exercise their franchise and decide the fate of 205 candidates -- prominent among them being BJP leader Swapan Dasgupta, TMC minister Ashima Patra and CPI(M) leader Kanti Ganguly -- in three districts -- Howrah, Hooghly and South 24 Parganas.

Tight security arrangements have been made to ensure peaceful voting, with 618 companies of CAPF deployed to guard 10,871 polling stations, all of which have been marked "sensitive" by the Election Commission. State police forces will also be deputed at strategic locations to aid the CAPF.

With the Covid-19 situation in the state taking a turn for the worse, polling will be held amid strict adherence to health protocols across all 31 constituencies -- 16 in South 24 Parganas (part II), seven in Howrah (part I) and eight in Hooghly (part I).

The TMC had won all but one seat of these 31 segments in the 2016 assembly elections. The Congress had managed to bag Amta constituency in Howrah district. 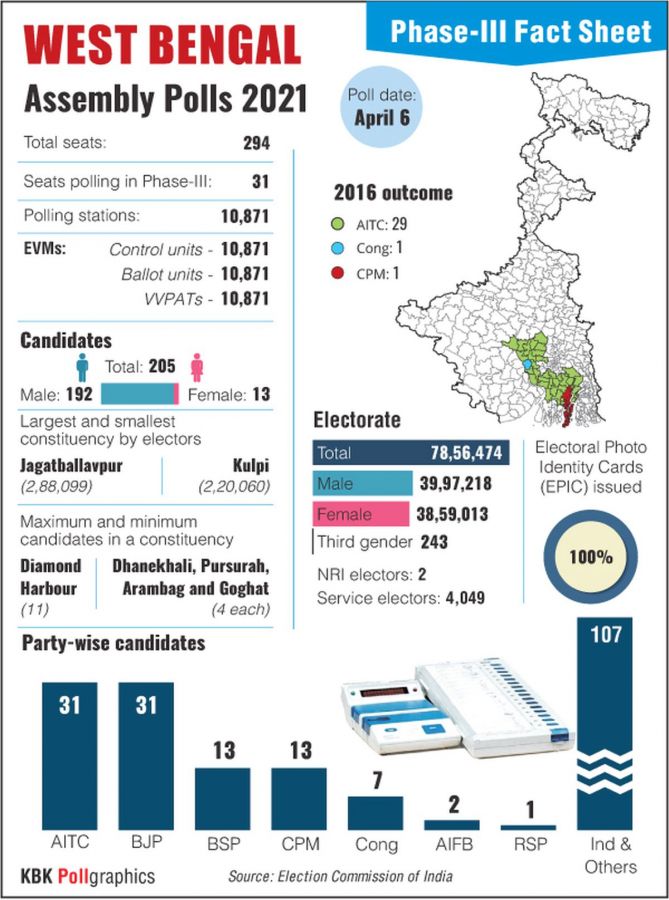 The saffron party, however, left the Left and the Congress behind to emerge as the main contender of the Mamata Banerjee-led party after the 2019 general election.

The Diamond Harbour Lok Sabha constituency, held by political heavyweight and TMC MP Abhishek Banerjee, will be closely watched, as four of its seven assembly segments will go to polls in the third phase, and the rest will follow suit in the fourth phase on April 10.

Sharpening its attack on the TMC over issues ranging from corruption to political violence, the BJP held power-packed campaigns across the three districts over the past few days, led by Prime Minister Narendra Modi who addressed several public meetings.

The TMC chief, who is still recuperating from her injuries, traversed the length and breadth of the three districts on her wheelchair, highlighting her government's development schemes, and hurling barbs at the BJP over price rise, and other central government policies.

The northeastern is all set to witness direct and triangular contests in 40 assembly constituencies that are going to polls in the last of the three phases on Tuesday to decide the fate of 337 candidates, including senior minister Himanta Biswa Sarma, his five cabinet colleagues and Bharatiya Janata Party state unit president Ranjeet Kumar Dass. 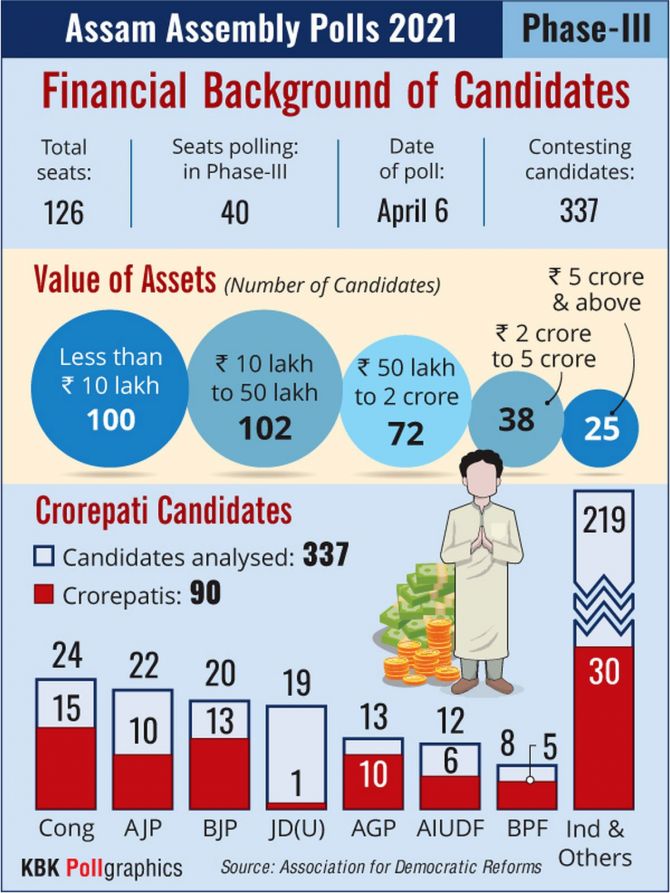 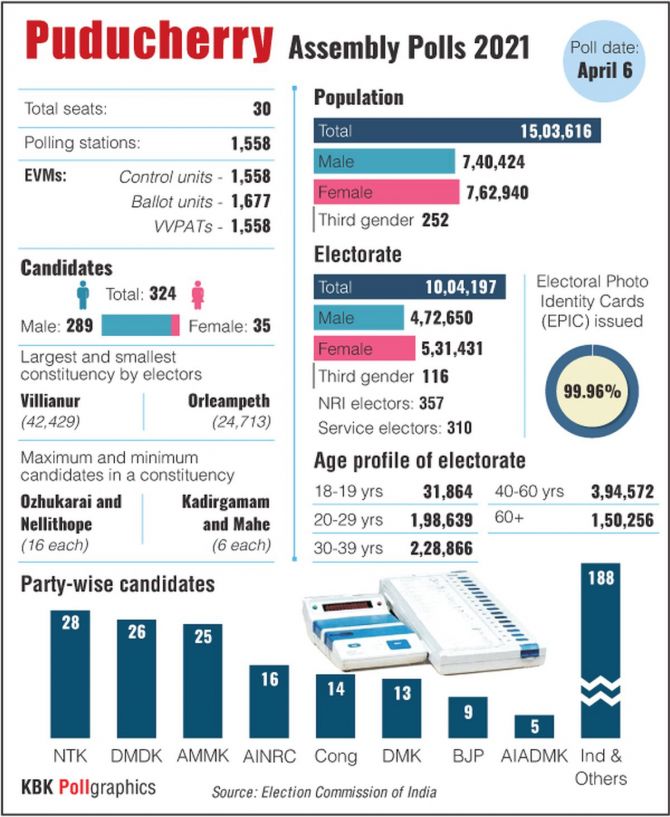 Puducherry will also vote on Tuesday to elect a new government following the collapse of its Congress-led administration due to an array of resignations.

It will witness a battle between the Congress party and the opposition led by a former chief minister N Rangasamy, who has allied with the BJP, the party accused of orchestrating the defection of ministers from the previous government by ‘purchasing’ and ‘threatening’ the Congress MLAs.