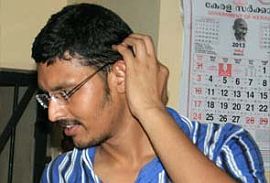 The Kerala police on Monday formed a 20-member Special Investigation Team to investigate and collect details about rape case convict Bitti Mohanty after he jumped parole in 2006 while serving a seven-year sentence in Alwar in Rajasthan, till his arrest from Kannur last week.

According to Kannur SP Rahul R Nair, the team headed by Deputy Superintendant of Police K S Sudharshan will gather as much evidence as possible to establish the identity of Bitti, who had been living in Kerala as 'Raghav Rajan' and had secured a job in a public sector bank.

The team will be divided into four squads, each comprising five personnel. Three teams will separately go to Andhra Pradesh, Rajasthan and Odisha to gather details regarding Bitti, as these are the places associated with him.

One of the squads will entirely focus on Bitti's life and activities after he came to Kannur, from where he obtained an MBA degree certificate and got the job as a probationary officer in the bank.

Nair, however, said that all these plans is subjected to the decision of the court on the state police's plea for custody of Bitti.

A police team from Rajasthan is also arriving in Kannur on Monday and is likely to seek custody of Bitti, he said.

According to police sources, though Bitti had admitted to the police about his true identity during interrogation, he retracted while being produced before a magistrate on Saturday, claiming he was not the absconding rapist.

Son of former Odisha DGP B B Mohanty, Bitti had pretended to be an Andhraite and during his stay also learnt to speak Malayalam well, without giving a clue to local people or his colleagues that he is a convict.

He landed in trouble after the employees of the bank's branch at Pazhayangadi grew suspicious of the true identity of their colleague on seeing his photo among pictures of accused in various sex crimes shown by TV channels and floated on the Internet in the wake of the Delhi gang rape incident.

He has been charged by Kerala police with cheating, forgery and impersonation.