Kerala Minister Saji Cheriyan on Tuesday landed in trouble for his harsh remarks against the Constitution, triggering a huge political row in the state with the opposition demanding for his sacking, but the Left leader later expressed regret and claimed news reports in this connection were 'distorted'. 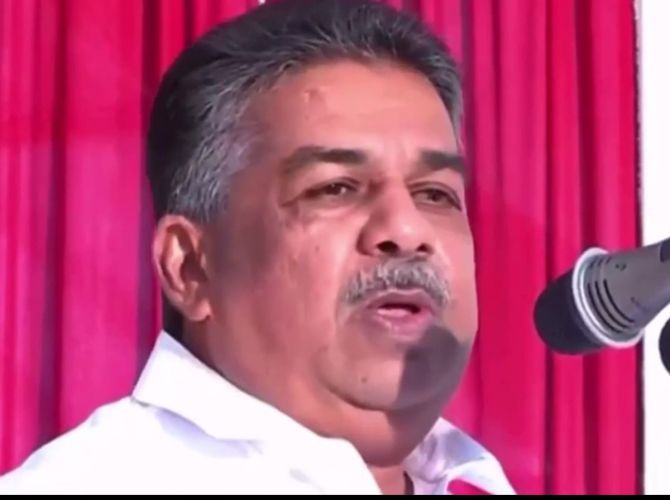 He is a public servant upholding the noble constitutional values, Cheriyan said hours after his speech at an event was aired by local television channels, triggering a backlash. The Opposition sought his expulsion from the Pinarayi Vijayan cabinet over the controversy but the ruling Communist Party of India-Marxist rejected the demand.

In the visuals aired by the local TV channels, the minister could be seen saying in a recent event that the Constitution of the country 'condones exploitation' and is written in a way helping to 'plunder' the people of the country, drawing sharp reaction from the opposition parties which sought for his immediate removal from the Left Democratic Front cabinet.

The central leadership of the ruling CPI-M, however, rejected the demand for resignation of the minister who holds the fisheries and cultural affairs portfolios, terming it as just a 'slip of tongue'.

In a statement given in the state assembly in the afternoon, Cheriyan said news reports claiming he had criticised the Constitution at an event held at Mallappally in Pathanamthitta district were 'distorted'.

"I am a public servant who respects our Constitution and upholds its noble values....I have never once intended to insult the Constitution or say anything against it," he said.

Stating that the further strengthening of the directives of the Constitution is essential to get justice for the exploited masses of the country, the minister said he, in his own style, only tried to express his concern that if it is not done, the Constitution would be powerless to defend the growing inequalities.

The Constitutional values like secularism, democracy and federal structure are facing severe challenges in the present time, he said adding that the imposition of labour codes in the country by cancelling all the existing legal provisions for the workers to obtain their rights would lead to gross exploitation.

The minister said he only did the duty of a public servant to point out the denial of social justice to the vast majority of people in the country even 75 years after the independence.

He also expressed 'deep grief' and 'regret' if his statements were propagated with wrong interpretations.

Cheriyan, in the recent speech, had alleged that the Constitution of the country was 'compiled by the British' and it was written as such by an Indian which has been implemented in the country for the last 75 years.

Values like 'secularism' and 'democracy', the 'kuntham and kodachakram' (spear and wheel) were just inscribed on its (Constitution) sides, he had said.

"We all say that we have a beautifully written Constitution in India...the most significant aspect of the country. But, I will say, a beautiful Constitution, which can serve to loot the most number of people, was written in the country," he said.

Stating ours is a country which does not accept workers' protests, he said, "Indian Constitution is one which condones the (labour) exploitation the most," and claimed this was the reason certain 'millionaires' in the corporate sector have grown in the country.

Cheriyan's remarks did not go down well with the Opposition Congress and the Bharatiya Janata Party.

The central leadership of the Congress on Tuesday demanded that the state minister be sacked immediately as he has 'insulted' the ideals of India.

"He has not only insulted the Constitution he took an oath to, but Baba Saheb Ambedkar and the ideals of India. He must resign or be removed instantly," the party's general secretary organisation K C Venugopal said.

Sudhakaran said there was nothing new in what Saji Cherian said as this has been the stand of CPI-M for ages.

"The CPI-M is one of two parties in India which have no respect for the Constitution. The other is RSS," he claimed.

BJP state president K Surendran also sought the immediate removal of Cheriyan and said he has no moral right to continue in the position even for a second.

He further alleged that it was Marxist party leaders' disrespect for the Constitution that had come out through Cheriyan's words.

However, CPI-M politburo member M A Baby said Cheriyan's remarks would have been just a slip of the tongue.

He said an explanation was sought from the minister, who is also a member of the party's Kerala state secretariat, and he has explained that no criticism was made against the Constitution.

Saying that the minister's remarks might have been misinterpreted, Baby, talking to Malayalam media persons in New Delhi, said there was no need to ask for his resignation on the basis of it.