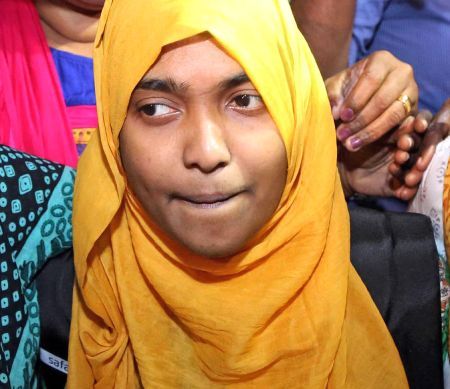 The Supreme Court on Thursday granted relief to Kerala-based Hadiya, a Muslim convert, and set aside the Kerala high court order annulling her marriage to a Muslim man, Shafin Jahan.

Following is the chronology of events of the case.

May 24, 2017: Kerala HC declares "null and void" the marriage of 24-year-old Hadiya, a Muslim convert, allegedly performed after she was abducted and wrongfully confined in an "illegal Islamic conversion centre" in Malappuram district.

August 4: The SC seeks reply of the National Investigation Agency and Kerala govt on a plea of Shafin Jahan challenging HC order annulling his marriage with Hadiya.

August 10: The NIA moves SC seeking an order to probe various aspects of Jahan's plea. SC orders Kerala Police to share with NIA the probe details of the case described by the HC as an instance of "love jihad".

August 16: The SC orders the NIA to probe the case of conversion and marriage of Hadiya to Jahan, as the agency claims a "pattern" was emerging in Kerala.

September 20: Plea in SC seeking recall of its order directing the NIA to investigate the case.

October 3: SC says it would examine whether HC can exercise its power under writ jurisdiction to annul the marriage of a Muslim man with a Hindu woman who had converted to Islam before tying the nuptial knot.

October 30: The SC asks Hadiya's father to produce her on November 27.

November  23: The NIA files status report of probe in SC.

November 27: SC frees Hadiya from her parents' custody, sends her to college to pursue her studies, even as she pleaded that she should be allowed to go with her husband.

January 23, 2018: SC says it was concerned about the choice of an adult to marry someone and made it clear that the NIA cannot probe the marital status of the couple.

February 20: Hadiya files affidavit in SC saying she had willingly converted to Islam and wanted to remain a Muslim. She also sought for permission to live as Jahan's wife.

February 22: SC questions whether the HC could nullify a marriage and if a roving inquiry could be ordered into the issue of consent between two adults to marry.

March 7: Hadiya's father files affidavit in SC claiming that his efforts prevented his daughter from being transported to "extremist-controlled territories" of Syria to be used as a "sex slave or a human bomb".