The Kerala high court on Tuesday dismissed two pleas challenging the sanction given by the Left Democratic Front government for the acquisition of 955.13 hectares of land in various districts of the state for the semi-high speed rail corridor, SilverLine, project. 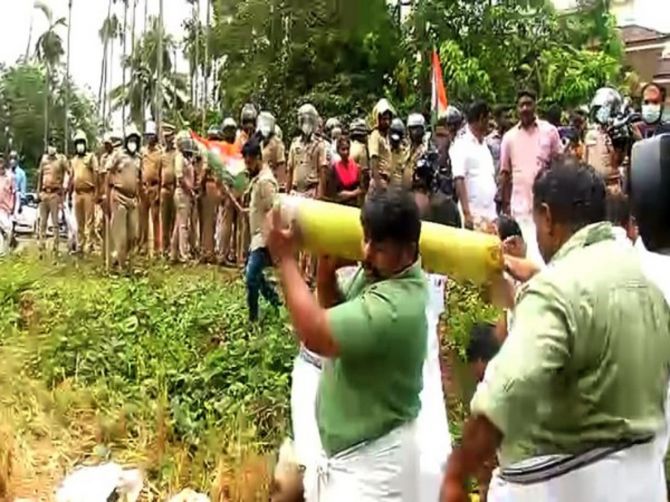 Justice N Nagaresh said there was no illegality in the sanction orders and the state government was justified in invoking the Right to Fair Compensation and Transparency in Land Acquisition, Rehabilitation and Resettlement Act, 2013 for acquiring the lands in question.

With the observations, the court dismissed the two petitions -- by persons whose land in Kottayam district was set to be acquired -- which had challenged the sanction order of August 18 last year on the ground land acquisition for a railway project can only be under the Railways Act and not the LARR Act.

The petitioners had contended that projects of the Union government and the railways were excluded from applicability of the LARR Act.

Opposing the contention, the state government had argued that the Railways Act was only applicable to Special Railway Projects and SilverLine did not fall in that category.

Agreeing with the state's contentions, the high court said that since the SilverLine project was not owned by the central government, it would be defined as a non-government railway and since it was not declared as a Special Railway Project the provisions of the Railways Act cannot be invoked for land acquisition.

"In the circumstances, the 2nd respondent (state government) was justified in invoking the provisions of the LARR Act, 2013 for the purpose of the proposed semi high speed railway line (SilverLine) project," the court said.

The Kerala government's ambitious SilverLine project is being opposed in various parts of the state with the general public as well as Congress-led UDF opposition and the BJP protesting against the survey wherever it is being conducted.

Women and children too were seen participating in the protests where agitators not only blocked K-Rail officials, supported by the police, from laying the concrete poles as part of the survey, they also removed the installed poles from several places.

The 530 km long SilverLine semi-high speed rail corridor which starts from Thiruvananthapuram will have stoppages at Kollam, Chengannur, Kottayam, Ernakulam, Thrissur, Tirur, Kozhikode and Kannur before reaching Kasaragod. The entire journey from one end to the other is expected to take around four hours.