Amid protest over the proposed ambitious semi-highspeed SilverLine rail project, also known as K-Rail, the Kerala government on Saturday published the detailed project report that estimated the cost of project to be Rs 63,941 crore. 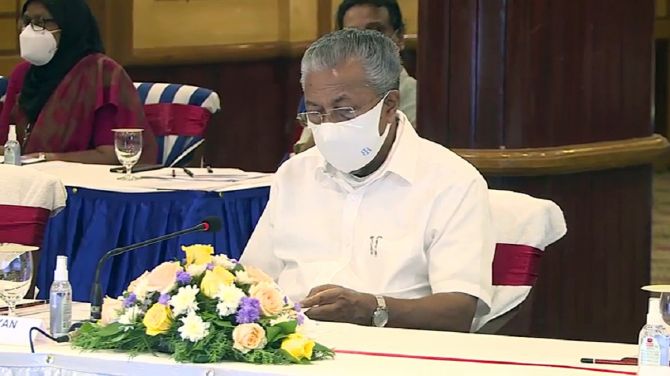 The DPR, published in the legislative assembly website, said the project is expected to complete by 2025 and would reduce journey time from Thiruvananthapuram to Kasaragod from 12 hours to just four hours.

The DPR noted that road traffic has been growing at a rate of 10-11 per cent in the state whereas the growth of the road length has been negligible. This results in a great increase in road congestion.

"The existing railway and road networks are not amenable to faster travel. Average speed on road and by train in the state is among the lowest of all regions of the country. Hence, the necessity for developing SilverLine corridors has been felt to cater to the needs of a rapidly growing and expanding economy and thereby curb the high road-based greenhouse gas emissions," DPR said.

The SilverLine project of 529.45km begins at Kochuveli, near Thiruvananthapuram airport, in Thiruvananthapuram district, and runs through the districts of Kollam, Alappuzha, Kottayam, Ernakulam, Thrissur, Malappuram, Kozhikode and Kannur before entering Kasaragod district.

As per the DPR, out of the 11 stations across Kerala, three of them -- Thiruvananthapuram, Ernakulam and Thrissur -- would be elevated ones while Kannur would have an underground station.

"The SilverLine alignment is not passing through any notified area such as national park, wildlife sanctuaries, biosphere reserves and other ecological sensitive areas. However, the alignment is somewhat parallel to one of the global biodiversity hotspots, the Western Ghats and hence impacts relating to biodiversity need to be carefully assessed," it said.

Commenting on the DPR, leader of Opposition VD Satheesan (Congress) said the over 3,700-page report was incomplete and unscientific.

"The DPR does not contain studies regarding the social and environmental impact the project will have. Without conducting a survey or a study, how did they prepare the DPR? They claim that all the raw materials needed to construct the project are available in central Kerala itself," Satheesan said.

But, he said, the K-Rail authorities claimed the raw materials would be procured from other states.

"But, the government does not have the details of the requirement of raw materials. If they have, they would have included them in the DPR," he said.

The Opposition has been organising widespread protest against the K-rail project.

The idea of highspeed rail corridor between Thiruvananthapuram and Kasaragod was first announced in the 2009-10 Kerala budget.

In 2009, the then VS Achuthanandan government had set up a corporation named Kerala High Speed Rail Corporation Ltd to implement the project.

Following that, Delhi Metro Rail Corporation conducted a feasibility study and submitted a report in 2012 to the then Congress-led Oommen Chandy government.

But, the project was not implemented due to various factors and the government had dissolved the KHSRC.

Later, the Pinarayi Vijayan government decided to build a special railway corridor between Thiruvananthapuram and Kasaragod and the project was announced by the then finance minister T M Thomas Isaac in the 2019-20 Kerala budget.

The project is to be executed by Kerala Rail Development Corporation Limited, a joint venture of the government of Kerala and the ministry of railways.