A magisterial court in Kerala on Wednesday cancelled the bail granted to senior politician PC George in a case accusing him of making a hate speech against Muslims in the state on April 29. 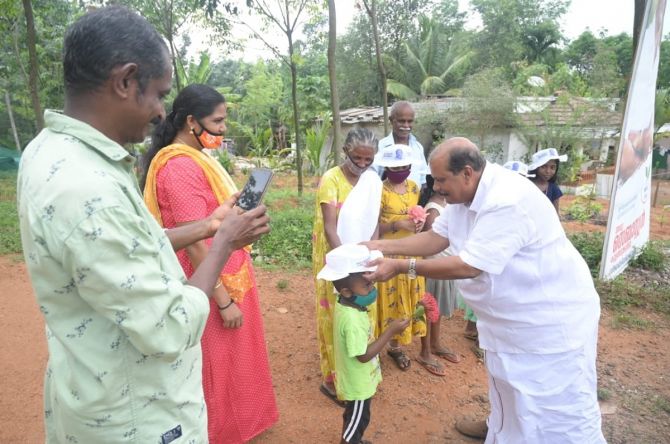 The court allowed the plea moved by the police to cancel the relief granted to George on May 1.

The police, in its plea, had contended that the veteran politician violated the bail conditions and, therefore, the bail was liable to be cancelled.

The court allowed the plea of the police, George's lawyer -- advocate Ajith Kumar -- be confirmed.

The lawyer said the senior politician has been asked to appear before the Palarivattom police station in Ernakulam district of the state in connection with another case of hate speech and he was on his way there.

Subsequently, when he arrived at the police station, workers of Peoples Democratic Party protested there seeking his arrest, according to visuals shown on TV channels.

The PDP workers were removed from there and soon thereafter, a large number of Bharatiya Janata Party workers and State president of the party K Surendran, and its candidate in the Thrikkakara by-election AN Radhakrishnan, arrived at the police station.

Surendran said the action taken against Geoge indicates the double standards of the LDF government as it did not take such steps against others who had in the recent past made communally charged remarks in public.

He said George would have the support of his party.

After he was questioned for some time at the Palarivattom police station, TV visuals showed him exiting the station along with his son and other BJP leaders including Surendran.

He was, thereafter, shifted to the Ernakulam AR camp where he is awaiting arrival of a police team from Thiruvananthapuram, a senior official said.

George has been granted anticipatory bail by the Kerala high court in the case lodged at Palarivattom police station.

On being asked whether he would appeal against the cancellation of his bail, advocate Ajith Kumar said his client would first obey the law and then decide what to do next.

The police had sought cancellation of his bail alleging that soon after he was granted the relief, George addressed the visual media in front of the judicial officer's quarters, Vanchiyoor, and said he was sticking to what he had stated in the speech and was justifying the same, which amounts to repetition of the same crime and spread of communal hatred further.

The police had pointed out that the Magisterial court, while granting bail, had directed the accused not to make and propagate controversial statements which may hurt the religious sentiments of others while on bail.

The police had arrested George on May 1 after registering a case against him under Indian Penal Code Sections 153A (promoting enmity between different groups on grounds of religion) and 295A (deliberate and malicious acts, intended to outrage religious feelings of any class by insulting its religion or religious beliefs) at Fort police station for allegedly making a communal speech against Muslims while addressing 'Ananthapuri Hindu Maha Sammelanam' on April 29.

The Palarivattom police booked the former legislator over his objectionable remarks during a speech that he delivered in connection with a temple festival at Vennala in Ernakulam district on May 8.