Kerala Chief Minister Pinarayi Vijayan on Saturday met Jawaharlal Nehru University Students Union president Aishe Ghosh and said the whole country was with them in their protest against the fee hike in the institution and Citizenship Amendment Act. 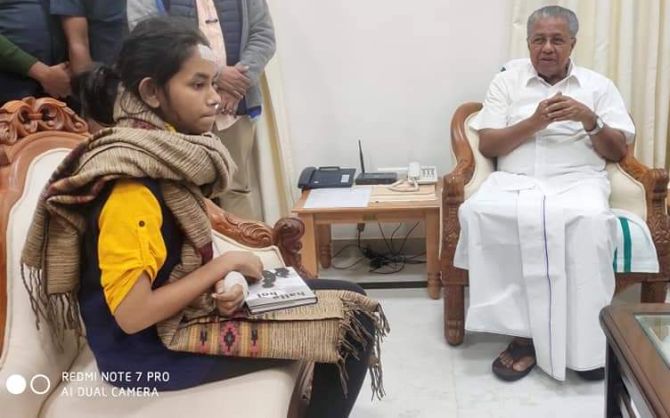 Vijayan met Ghosh at Kerala House in New Delhi, expressed solidarity with their protest and also gifted her a book, 'Halla Bol: The Death and Life of Safdar Hashmi' by Sudhanva Deshpande.

Ghosh had suffered head injuries during the January 5 attack on JNU students in the campus by a group of masked assailants.

"The whole country is with the JNUSU in their fight for justice. Everyone knows about your protest and also about what has happened to you in the fight for justice," Vijayan told Ghosh after enquiring about her health and that of other students, who were injured.

In a Facebook post, the Communist Party of India-Marxist veteran wrote that the JNU students were fighting an "epic battle" against the Sangh Parivar.

“Sangh Parivar was hoping to overcome the dissenting voices from JNU using muscle power. However, the JNU has put up an uncompromising fight against them. Aishe Ghosh has been leading this battle with her injured head," Vijayan said. 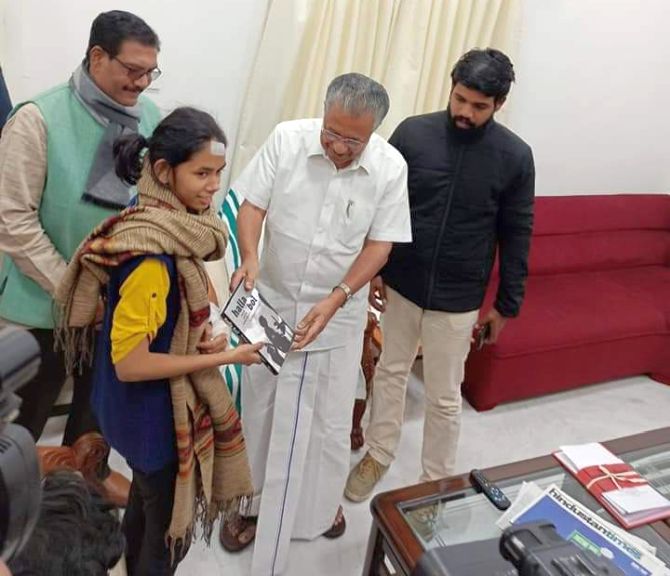 Ghosh, after meeting Vijayan, thanked the people of Kerala for standing with JNU when the campus was under attack.

"Comrade Pinarayi has said go ahead and that is the inspiration I take and we will take this fight ahead.

Whether it is the fight for rolling back the fee hike or against the CAA, I would like to thank, again and again, the people of Kerala who stood by us during all these attacks that we are continuously facing," Ghosh told the media.

Ghosh reached Kerala House after her daily check up at the All India Institute of Medical Sciences.

Violence had broken out at the JNU on January 5 night as a group of masked people, allegedly belonging to the Akhil Bharatiya Vidyarthi Parishad, the students wing of the BJP, armed with sticks attacked students and teachers besides damaging property on the campus, prompting the administration to call in the police. 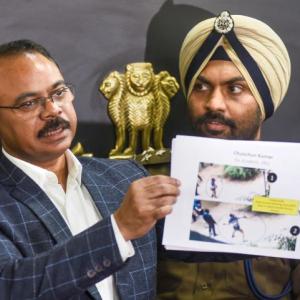