Local fishermen, opposing the Vizhinjam international seaport project near Thiruvananthapuram, on Thursday intensified their agitation by setting a fishing boat on fire and throwing police barricades into the sea, as the stir entered the 100th day. 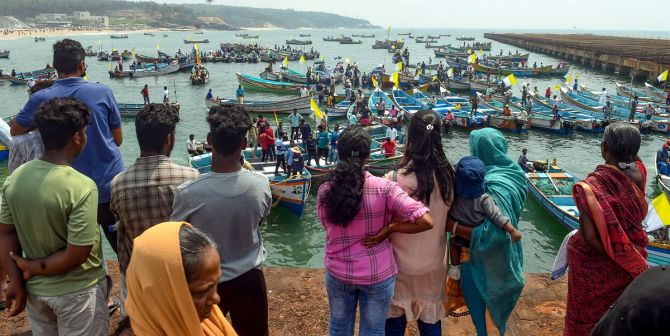 Hundreds of fisherfolk, including women, reached the area via road and sea and broke open the lock of the gate of the project site, raising slogans.

Besides those from the coastal villages in the Kerala capital, a large number of fishermen arrived in boats from nearby places including Muthalapozhi under the aegis of the Latin Archdiocese to stage protests.

Showing the burning boat, one of the protesters told reporters that they had no other way to make the authorities understand their plight.

"If there is no coast, we have no life. We are setting afire our means of livelihood. If the port comes into being, we will lose our coast forever," he said.

Another fisherman pointed to the lack of availability of kerosene subsidy, a long pending demand of local fisherfolk, and demanded that it be provided on the lines of neighbouring Tamil Nadu.

In the wake of reports of the fishermen's plan to intensify their protests, police security was beefed up at the site of the under construction port and its surroundings.

A large number of people have been staging protests outside the main entrance of the multi-purpose seaport at nearby Mulloor for a few months. They were pressing for their seven-point charter of demands that include stopping the construction work and to conduct a coastal impact study in connection with the multi-crore project.

The protesters have been alleging that the unscientific construction of groynes, the artificial sea walls as part of the upcoming Vizhinjam port, was one of the reasons for the increasing coastal erosion.

The Kerala high court, on October 19, had made it clear that its interim orders to remove obstructions created by protesters at the entrance of the Vizhinjam port has to be implemented by the state government.

The high court said its order should be implemented before the next date of hearing on October 25.

The direction came during the hearing of an ongoing contempt plea moved by the Adani Group.