Kejriwal's resignation was a foregone conclusion 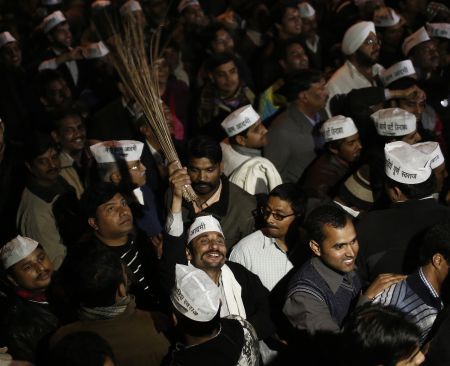 The AAP deliberately flouted procedures when it attempted to table the Jan Lokpal Bill in the Delhi assembly on Friday, knowing that it would fall by the wayside. But Kejriwal was not perturbed as he was looking for an opportunity to opt out and the anti-graft bill was the perfect reason for doing so as it would enable him to go out in a blaze of glory and accuse the Congress and the BJP of not being serious about fighting corruption, analyses Anita Katyal.

When the Arvind Kejriwal-led Aam Aadmi Party decided to form a government in Delhi with the support of the Congress less than two months ago, it was known that this arrangement would not last long given their strong aversion for each other.

As a result, nobody was surprised when Kejriwal tendered his resignation on Friday evening after his government failed to introduce the Jan Lokpal Bill in the Delhi assembly.

It was an event waiting to happen. But it was widely believed that it is the Congress which would end this stormy relationship. Not happy with the decision to prop up an AAP government, the Congress was biding its time till the Lok Sabha elections to pull the plug.

Having been reduced to a poor third in Delhi, the party was in no shape to face another election so soon. It needed time to regroup and rebuild the party. At the same time, it wanted to expose the AAP government because it was convinced that its popularity would start waning since it would not be able to deliver on its unrealistic promises.

A senior Congress leader had told Rediff.com a couple of days ago that it would not like to do anything in the run-up to the general election to make Kejriwal a martyr as it would only enhance his party’s popularity. It was for this reason that the Congress did not reject Kejriwal’s decision to file FIRs against Union Petroleum Minister Veerappa Moily, former minister Murli Deora and industrialist Mukesh Ambani on the issue of gas pricing.

The Congress maintained that it was not against any probe and believed that those guilty should be punished but it also hoped that the enquiry would not be politically motivated. It had taken a similar position when the AAP government directed its Anti-Corruption Bureau to file an FIR against those involved in the Commonwealth games cases, which included former chief minister Sheila Dikshit.

Most importantly, it was depending on AAP to stop Bharatiya Janata Party’s prime ministerial candidate Narendra Modi in his tracks as both appeal to the same constituency: the urban middle class and the youth.

“Arvind Kejriwal is desperate to leave and is looking for a way to opt out. We are not going to fall into his trap. Instead, we want to give him a long rope to hang himself,” was the common refrain in the Congress.

But the grand old party was beaten to it by Kejriwal.

Aware of the Congress game plan, Kejriwal moved swiftly to pre-empt the Congress. Although AAP was the product of the party’s strong anti-Congress campaign, it decided to take its support to form a government as it did not want to be accused of running away from its responsibilities.

Further, the debutant party wanted to show that it could deliver on its promises in the short time at its disposal to enable it to build its profile, win goodwill and spread its wings beyond Delhi. It wanted to use its stint in office, howsoever short, to lay the foundation for the Lok Sabha polls.

Realising that time was not at his side, Kejriwal rushed into implementing his party’s agenda. He announced 700 litres of free water supply to every family, ordered a cut in power tariffs, waived off power bills of defaulters who supported his party and ordered the audit of the power companies. At the same time, he continued to provoked and needle the Congress by ordering a probe against its ministers, staging a dharna against the Centre for shielding Delhi police personnel and then taking on Delhi Lieutenant Governor Najeeb Jung.

Having come into existence on the anti-corruption plank, Kejriwal centred the endgame around the passage of the Jan Lokpal Bill.

The AAP deliberately flouted procedures when it attempted to table the bill in the Delhi assembly on Friday, knowing that it would fall by the wayside. But Kejriwal was not perturbed as he was looking for an opportunity to opt out and the anti-graft bill was the perfect reason for doing so as it would enable him to go out in a blaze of glory and accuse the Congress and the BJP of not being serious about fighting corruption.

A 'lose-lose situation' for the Congress

As the events have unfolded, the Congress finds itself in a 'lose-lose situation'. The party’s popularity is at an all-time low and the coming elections do not augur well for the grand old party. It already has a formidable political opponent in Narendra Modi.

It can ill-afford a rampaging Arvind Kejriwal who will now be free to run a nation-wide campaign against the Congress. A stint of Central rule in Delhi, which now looks inevitable, will only go to further discredit the Congress.

Although the BJP also has reason to be perturbed as AAP could wean away a section of the middle class and youth vote which has been gravitating towards Modi, it is not as badly placed as the Congress. The saffron party recently registered emphatic victories in Madhya Pradesh, Chhattisgarh and Rajasthan and is poised to do well on the national level.

As far as Delhi is concerned, the BJP need not rush into forming a government here though it would be a tremendous morale booster in the run-up to the general election as it has been occupying the opposition benches for the last 15 years.

However, it can afford to wait for the outcome of the Lok Sabha polls to decide on its next step as it will be easier for it to form a government in Delhi if it comes to power at the Centre.

Image: An AAP supporter hold the broom, the party’s election symbol, high as Arvind Kejriwal speaks about his resignation at the party headquarters on Friday