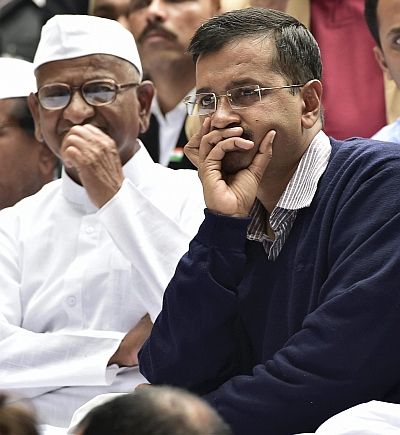 In a rapprochement three years after they split, Delhi Chief Minister Arvind Kejriwal on Tuesday shared stage with Anna Hazare on the second and final day of the Gandhian's protest against the contentious land acquisition ordinance while accusing the Modi government of adopting anti-people policies.

The 77-year-old activist welcomed Kejriwal, his one-time protégé, at the protest venue as almost all Aam Aadmi Party MLAs including Deputy Chief Minister Manish Sisodia joined the agitation at the Jantar Mantar along with leaders of several other political parties.

Kejriwal also touched Hazare's feet seeking blessings. "I want to tell Annaji that I always consider him my guru, someone like my father, and I want to say Annaji that we are with you and support this movement with our heart and soul," the Delhi chief minister said.

Kejriwal and Hazare, the two most prominent faces of the Lokpal movement fell apart after Kejriwal decided to launch a political party in October 2012.

In his brief address, Kejriwal came down hard on the Centre for the controversial legislation and said this law will make the Centre work like a "property dealer" for corporates.

Earlier, in his address, Hazare slammed the Centre for the land ordinance, saying the law was "more barbaric" than those promulgated by British government in 150 years of its rule. "I will fight for the country till the last breath, the way I have been fighting for the last 40 years. It is better to die for the country, rather than dying of a heart attack," Hazare said.

Kejriwal said the Bharatiya Janata Party was punished in the Delhi assembly elections for their anti-poor policies though the same party was given a massive victory in the Lok Sabha elections just nine months back.

"If the amendment bill is passed, then this government will become a dalal, it will become property dealer for big companies. We vehemently oppose the bill. The government should learn a lesson. People had whole-heartedly supported the BJP in May and ensured their victory in the Lok Sabha polls.

But after eight to nine months, due to their policies, people have uprooted the BJP," he said.

Hazare said he will take the agitation to each and every corner of the country and will not relent until interests of the farmers are protected.

"Under the British regime, farmers were allowed to go to court as and when they felt that injustice were meted out to them. This government has snatched this right too as farmers will have to seek prior permission from the authorities before knocking at the door of court," he said.

He said a jail bharo (fill the jails) movement will be launched four months later from the Ramlila Maidan.

"When each and every jail would be filled by us, then only Narendra Modi government's mind would come on the right track," he said.

The social activist said he will not go for any hunger strike. "I have done fast for 16 times, but now I won't do it anymore. Because I don't to want die and want to serve country by living."

Earlier, Kejriwal waited for sometime near the stage at the protest venue as Hazare had said politicians will not be allowed to share the dais. But the Delhi chief minister was soon welcomed to the stage where he sat next to Hazare.

In his address, Kejriwal said though the Delhi government does not have authority over land but it will ensure that land was not taken away forcibly in the city. "In the country, if any government makes law against the poor, makes laws against the farmers, the public will not let it last. They will teach them a lesson," Kejriwal said.

He was among a host of leaders cutting across party lines who joined the agitation on a day the government introduced the Land Acquisition Bill in Lok Sabha amid a walk out by the opposition.

Though Hazare had earlier ruled out sharing stage with any politician, political leaders including Communist Party of India's Atul Anjan and Vaiko of the Marumalarchi Dravida Munnetra Kazhagam were among those sitting on the dais.