Hailing Uttar Pradesh Chief Minister Mayawati for pushing through a resolution in the assembly on splitting the state, the Telangana Rashtra Samiti on Monday demanded that the Centre give its assent to it and also carve out a separate Telangana state.

"TRS welcomes the decision of the UP Chief Minister. It is a bold step. It is very good for democracy. She has also reiterated her support to the formation of Telangana. For her act of kindness, I thank her," TRS chief K Chandrasekhar Rao told media persons in Hyderabad before leaving for Delhi to attend the Parliament session.

Demanding that the Centre accept the Telangana demand without any further delay, the Mahabubnagar Lok Sabha MP said Congress would be "buried" in the region if it did not carve out the separate state.

The TRS president said his party would "stall" Parliament session in support of its separate statehood demand.

"My intention of going to Delhi is to stall the (proceedings of) Parliament and demand Telangana state. We hope the Centre will concede the demand of Telangana state," he said.

Rao said he would seek cooperation of Mayawati and BSP MPs in raising the Telangana demand during the Winter session.

Appreciating the BSP supremo for her move to pass a resolution in the UP assembly for division of the state, he said smaller states would ensure faster development.

Asked about reports that the Centre was contemplating appointing a States' Reorganisation Commission or a regional council for the region, Rao claimed that the Centre had already "announced that it will form" a separate Telangana state.

"The AICC spokesman has already said SRC will not be appointed over Telangana issue. It is good if they form separate Telangana as per their promise without any delay," he added.
Source: PTI© Copyright 2021 PTI. All rights reserved. Republication or redistribution of PTI content, including by framing or similar means, is expressly prohibited without the prior written consent.
Related News: Telangana Rashtra Samiti, BSP, TRS, AICC, KCR
SHARE THIS STORY
Print this article
Mayawati hits back at oppn for slamming her move to split UP
TRS chief rubbishes TDP's allegations; demands apology
SC notice to AP govt on plea against Telangana stir 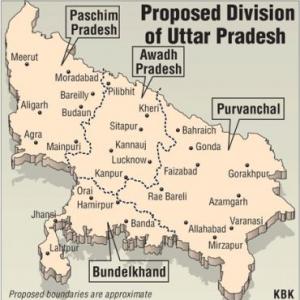