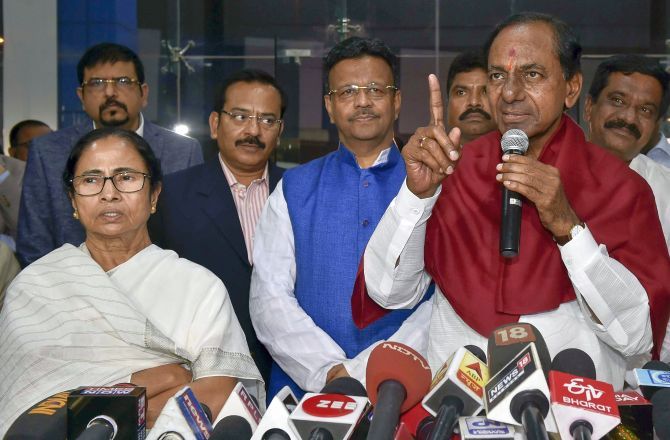 Rao, the chief of Telangana Rashtra Samithi, also said the planned alliance will very soon come out with a "concrete plan" for the next year's Lok Sabha elections.

The meeting at the state secretariat came a day after Rao met his Odisha counterpart and Biju Janata Dal president Naveen Patnaik in Bhubaneswar.

Fresh from a resounding victory in his home state Telangana, Rao is meeting prominent leaders in a bid to provide an alternative to the Congress and the BJP.

Rao is also expected to meet Bahujan Samaj Party supremo Mayawati and Samajwadi Party chief Akhilesh Yadav, both former chief ministers of Uttar Pradesh, among others in the next couple of days.

Describing his meeting with Banerjee as a "very pleasant one", Rao said "discussions (on a Federal Front) will continue".

"Discussions with didi is always there. When two political leaders meet, they definitely discuss matters of mutual interest and matters of national interest.

"We had a very pleasant discussion. We will continue our discussion. There is a dialogue which I had started yesterday. This is a unification of forces across the nation. I met Odisha's chief minister yesterday and today I met didi," Rao told reporters.

Banerjee, who was beside Rao at the brief media interaction, did not offer any comments about the meeting.

"Our dialogue will continue. Very shortly we will come out with a concrete plan," Rao said recalling the congratulatory call he got from the Trinamool Congress(TMC) supremo after he was elected as the chief minister for the second time.

"I came to visit the Kalighat (famous Kali temple in Kolkata) and I thought of meeting didi and seek her blessings," he added.

Asked about his mission to evolve a non-BJP and non-Congress alliance, Rao said," I will continue with my efforts. It is the mission of KCR, I will continue in my mission."

The Congress on its part accused Rao of doing "politics of division" and helping the ruling BJP by proposing a non-Congress national front of other parties. 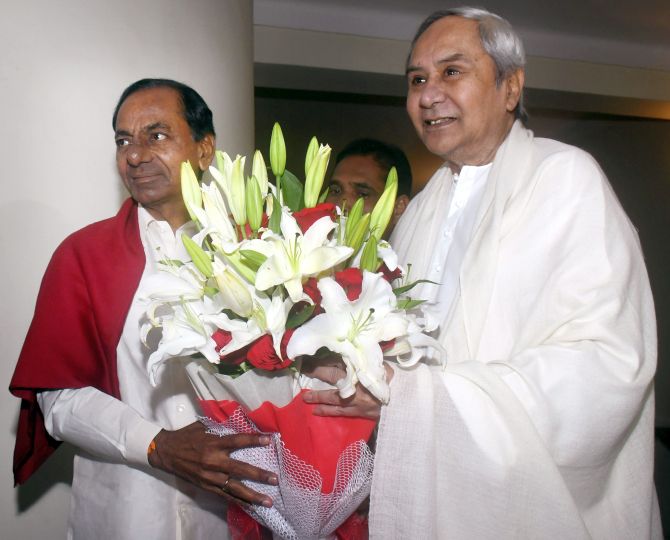 Congress spokesperson Abhishek Singhvi expressed confidence that the Congress will emerge victorious after contesting polls together with a number of parties in the next elections.

"If you talk of exclusion and do not want to ally with one who wants to ally with the Congress, then you are doing 'politics of division' and you want to help the ruling party....I don't think, other parties will get trapped in this," he told reporters in Delhi when asked about the TRS chief's proposal.

Singhvi said if one wants to keep the principal party other than that in power, out of an alliance, "it becomes clear that they want to help someone else".

The Congress leader said his party did not have any problems in a leader of one opposition party meeting another and that "everyone is free to meet anyone".

As the opposition parties work out their strategies for the Lok Sabha polls, the BJP said the Congress and its President Rahul Gandhi are not acceptable as a pivot to many parties outside the party-led NDA and dubbed the "so-called" opposition unity against the saffron party as a "bogus claim."

"That the so-called Opposition unity against the BJP is a bogus claim is evident from the multiple fronts being forged by non-NDA parties," the BJP spokesperson G V L Narasimha Rao told PTI in Hyderabad.

Rao was responding to a question on Rao's stepped-up efforts to forge a non-Congress, non-BJP front of regional parties.

"The efforts of TRS chief KCR (Chandrasekhar Rao) and the apparent interest of some regional parties shows that the Congress and its President Rahul Gandhi are not acceptable as a pivot to many parties outside the NDA," Rao said.

"The BJP will highlight in campaigns that these ragtag coalitions are a threat to stability and development and are driven by personal agendas."

From the anti-BJP bloc, while some leaders like Telugu Desam Party chief and Andhra Pradesh chief minister N Chandrababu Naidu and Dravida Munnetra Kazhagam's M K Stalin are trying to forge a broad coalition that includes Congress, others like Rao and Banerjee are strong votaries of a Federal front of regional parties.

Stalin's "Rahul-for-PM" proposal recently was not taken kindly by the TMC and other parties who advocated that leadership issue of the opposition camp should be decided after the Parliamentary polls.

After meeting Patnaik, Rao emphasised a "dire need" for unification of regional parties to provide an alternative to the Congress and the BJP.

Both the chief ministers had a detailed discussion on national issues, including the need for "better friendship among regional parties", Patnaik said.

"This is just the beginning of a dialogue... We will meet again and discuss how to take things forward," Rao said.