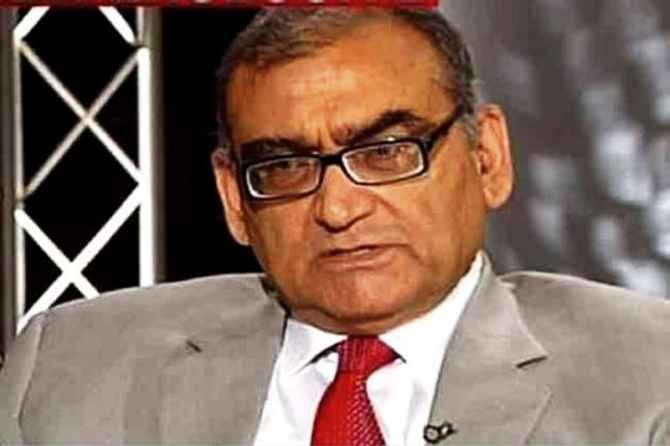 Former Supreme Court judge Markandey Katju, currently chairman of the Press Council of India, on Monday stirred a controversy by alleging that three ex-Chief Justices of India had compromised in giving extension to an additional judge of the Madras high court at the instance of the United Progressive Alliance government in the wake of pressure from one of its allies, apparently the Dravida Munnetra Kazahagham.

Katju made the charge while alleging how the three former CJIs -- Justices R C Lahoti, Y K Sabharwal and K G Balakrishnan -- had made "improper compromises" in allowing the judge, against whom there were several allegations of corruption, to continue in office.

"These three former CJIs made improper compromises. Justice Lahoti who started it, then Justice Sabharwal and then Justice Balakrishnan. These are CJIs who can surrender. Is a CJI going to surrender to political pressure or not going to surrender to political pressure?" Katju, who became the chief justice of Madras high court in November 2004, told NDTV. Katju later became a Supreme Court judge.

Katju said since he got many reports that the additional judge concerned was allegedly indulging in corruption he had requested the then CJI Lahoti to get a secret Intelligence Bureau inquiry made about him.

He claimed that the IB report found the allegations to be true and the additional judge should have been sacked.

Katju said since the two-year term as additional judge of that person was coming to an end, he presumed he would be discontinued as judge.

"But to my utter shock I came to know he was been given another extension when an adverse IB report was there," he said.

Katju said he came to know that the reason for all this was that at that time the UPA-I government was dependent on allies and one of them was a Tamil Nadu party, an apparent reference to the DMK whose leader was given bail by the additional judge concerned.

Katju said that the additional judge was not a permanent judge and that they he may or may not be confirmed.

"There was no justification for giving him another term of one year and later on Justice Lahoti retired. Justice Sabharwal also I think once or twice gave him terms as additional judge and then he also retired. Justice Balakrishnan made this judge permanent judge although he tranferred him to another high court," he said.

The leader of the Tamil Nadu party was a solid supporter of the additional judge who had given him bail, Katju said.

Katju said the matter had come to a three-judge collegium of the apex court of which Lahoti and Sabharwal were among the members and it was recommended that the district judge should not be continued in office.

He said on coming to know of the recommendation of the collegium, the Tamil Nadu-based party reportedly objected to it.

Katju said the information he got was that then Prime Minister Manmohan Singh was at that time leaving for New York to attend the UN General Assembly session.

At the Delhi airport, he was told by ministers of the Tamil Nadu party that by the time he returned from New York his government would have fallen as their party would withdraw support to the UPA (for not continuing that additional judge).

Katju, however, said he had no personal knowledge about this.

The UPA government was at the Centre at that time and Congress was the largest party in this alliance but it did not have a majority in Lok Sabha, and was dependent on the support of its allies.

Katju said one such ally was the party in Tamil Nadu which was backing this "corrupt judge".

Katju said the reports he had was that Singh panicked, but he was told by a senior Congress minister not to worry, and that he would manage everything.

That minister then went to Justice Lahoti and told him there would be a "crisis" if that additional judge was discontinued, he said.

On hearing this, Justice Lahoti sent a letter to the Government of India to give another term of one year as additional judge to that "corrupt judge", he claimed.

Katju wondered whether Justice Lahoti consulted his two Supreme Court collegium members and concluded it was in these circumstances this "corrupt" judge was given another one-year term.

Asked why he was making this disclosure now, Katju said the timing was "immaterial" and that instead the matter should be investigated to find out whether what he was saying was correct or not.

Former CJI K G Balakrishnan hit back at Press Council of India chairman Markandey Katju, terming as "completely baseless" his allegations that he and two other ex-CJIs made "improper compromises" in retaining a Tamil Nadu judge under corruption cloud during UPA rule.

"In confirmation of a judge, what is improper compromise .... After 10 years, he makes these (allegations) and that too when that gentleman is no more," Balakrishnan said.

Balakrishnan, currently chairperson of National Human Rights Commission, however, said there were allegations against the judge that he had some "acquaintances" with the ruling party in Tamil Nadu and that is why he had transferred him to Andhra Pradesh.

"There is no political pressure or anything of that sort or any corruption. I do not know what he (Katju) is saying," he said.

"All confirmation is done only after receiving a satisfactory report from the chief justice of the concerned high court. There is no other procedure. Unless we get such a report, no judge, additional judge would be confirmed as a permanent judge," Balakrishnan said.

He said extension to the judge in question was given on the basis of a report by the then CJI of the Tamil Nadu High Court.

Asked whether the issue should have gone to Supreme Court Collegium, he said the opinion of Chief Justice of particular High Court is taken in such matters.

"Earlier there was no practice of cases of confirmation going to Collegium," he said, adding because of these kind of allegations, now certain cases are sent to Collegium.

"Because of these kind of allegations, now I think they seek opinion of other members of the Collegium," he said.

Meanwhile, the ruling All India Anna Dravida Munnetra Kazhagam in Tamil Nadu on Monday forced an adjournment of the Rajya Sabha twice during Question Hour over Katju's reported allegation that political pressure during the previous UPA regime had led to elevation of a judge despite charges of corruption against him.

Ruckus created by AIADMK members seeking suspension of Question Hour to discuss the issue of "political interference in judicial appointments" led to the House first being adjourned for 10 minutes and then till 1200 hours.

No sooner had Ronald Sapa Tlau, the newly-elected member from Mizoram, taken oath, AIADMK members were up on their feet displaying copies of a newspaper that carried an article by Press Council of India Chairman Katju on the appointment.

"You will not show newspaper here, Dr Maitreyan," Chairman Hamid Ansari said referring to AIADMK leader who wanted the Question Hour to be suspended to discuss the issue.

V Maitreyan said this was an important issue.

"You can't do this... nobody is listening to you," Ansari said as AIADMK members moved into aisle raising slogans.

He then adjourned the House for 10 minutes.

When the House reassembled, similar scenes were witnessed with AIADMK members insisting on suspension of Question Hour.

"If you have an issue to raise, raise it through appropriate procedure. This is not the way. You are disrupting listed business," Ansari said warning members that he would name them if they continued to display newspaper.

"I will have to name you for display of newspaper," he said as unheeding AIADMK members continued to shout slogans.

Maitreyan wanted to know if former Prime Minister Manmohan Singh, who was seated in the House, was aware of the allegation against the judge and if his ally DMK had put pressure on his government to elevate him.

Minister of State for Parliamentary Affairs Prakash Javadekar said the Chair could give one minute to the agitating members to make their point and then Question Hour can be taken up.

Parliamentary Affairs Minister M Venkaiah Naidu said the Question Hour should be allowed to proceed and the issue can be raised after that if the Chair permits.

"I am not going into the merits of the case," he said.

Ansari said there was an established procedure for taking up issues. "Why is it being ignored?"

"The House is adjourned till 1200 hours because of disruption caused by some members in violation of the rules," he said.

Katju has alleged that a district judge in Tamil Nadu was elevated to an additional judge of the Madras High Court despite charges of corruption against him.

AIADMK members in Lok Sabha on Monday sought an enquiry into the allegations of corruption in judiciary made by former Supreme Court judge Markandey Katju, charging DMK and the erstwhile UPA government with "interfering" in the appointment of a Madras High Court judge.

"It is a serious matter ... the previous government and the DMK interfered in the appointment of a corrupt judge," AIADMK leader M Thambidurai said during Zero Hour, demanding a probe into the allegations by the government.

"The Law Minister should respond to the allegations made by Katju. We urge him to hold an enquiry ... to find out who is the judge, how DMK pressurised the previous government by saying the government will fall....," he said as AIADMK members were on their feet and some in the aisle to demand a statement from the government.

Though Law Minister Ravi Shankar Prasad was present in the House, Speaker Sumitra Mahajan said she cannot compel the government to make a statement during Zero Hour.

Congress members were on their feet with senior leader Amarinder Singh trying to raise a point of order saying rules did not permit a discussion on a Supreme Court or a High Court judge in the House.

Parliamentary Affairs Minister M Venkaiah Naidu said a point of order has been raised, let it be heard and the Speaker would decide.

To this, Mahajan said point of order cannot be raised during the Zero Hour and she had not allowed a discussion on the issue.

Image: 3 ex-CJIs acted at the behest of UPA-I which was under pressure from its Tamil ally, claims former SC judge Justice Markandey Katju