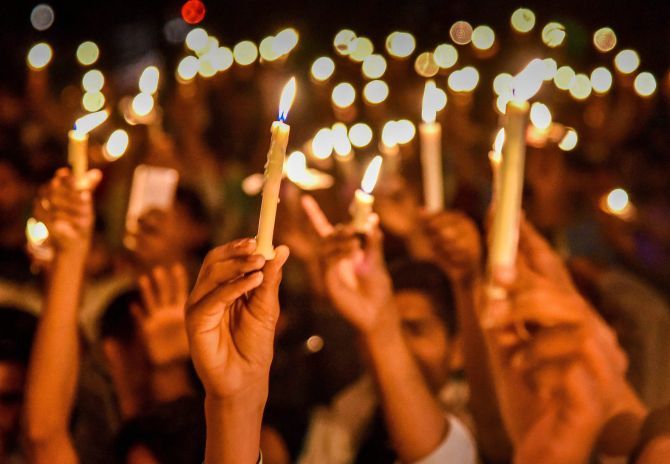 As the Bakerwals make their way to the upper reaches of Jammu and Kashmir with their belongings, she trudges along burdened by the weight of her eight-year-old daughter's death.

"She was so beautiful and intelligent. I wanted her to be a doctor when she grew up," the biological mother of the girl reminisces.

"My only wish is the culprits should be hanged for the heinous crime, so that no other family has to go through it," she says.

Chief Minister Mehbooba Mufti has written to the chief justice of the Jammu and Kashmir high court, requesting setting up of a special fast track court to try the brutal rape and murder of the eight-year-old girl in Kathua.

The chief minister requested the chief justice for establishment of the special fast track court for the case, official sources said.

It would complete trial in 90 days and would be the first such court in state, they said.

The state government has also decided to terminate from service the cops accused in the case, they added.

The girl was adopted by the woman's brother and his wife in Rasana hamlet of Kathua district when she was one year old.

Still in shock, she blames herself for leaving her daughter at brother's house.

"Why was she killed? She was grazing cattle and taking care of horses. She was eight years old. Why did they kill her in such a brutal way. They should be given death sentence," she says.

The girl's father said she was at maternal uncle's home in Rasana.

"The killers should be given death penalty. We do not need a CBI (Central Bureau of Investigation) probe, we have faith in investigation by the Crime Branch," he says.

Jammu has been on tenterhooks since the brutal rape and killing of the girl belonging to the nomadic Muslim Bakerwal community.

Her body was found in Rasana forest on January 17, a week after she went missing while grazing horses in the forest area.

The couple along with their two kids and cattle left their hamlet in Samba and in Round-Domail in Udhampur district as part of their annual trek to Sanasar mountainous belt.

The mother says that earlier they had good relations with Hindus and lived in harmony with them.

"But after this incident, the relations have soured and we are fearful. We only want justice for her. She was our dear child. She was beautiful and we loved her," she says.

They wanted take her back, teach her and make her a doctor, the mother said, adding that she was very intelligent.

"The prime minister had said "Beti Padavo Beti Bachavo" but how are they teaching and saving girls like this," her adoptive father asks.

"The ministers are supporting the rape accused, saying that they are innocent, but they are wrong," he says.

The biological father says the world knows that their daughter, who did not know about the difference between Hindus and Muslims, was wronged and murdered in most barbaric manner.

"The world and entire India knows it. They are supporting them. I do not say she was our only child, she was everyone's child. The incident should not be looked at through the religious lens," he said.

On January 23, the government had handed over the case to the Crime Branch of the state police which formed a special investigation team and arrested eight people including two special police officers and a head constable.

The police has arrested eight people in the case, but the Bar Association has opposed the action, alleging targeting of minority Dogras.

Case against former bank staffer for comments on victim

A case was registered on Saturday against a former bank employee for allegedly justifying the gang rape and killing of the eight-year-old girl in Kathua, police in Kochi said.

Vishnu Nandakumar, who had triggered a social media furore with his alleged Facebook comments against the Kathua rape victim, was charged under section 153A (Promoting enmity between different groups on grounds of religion, race, place of birth, residence, language etc., and doing acts prejudicial to maintenance of harmony) of the Indian Penal Code, they added.

The case was registered at the Panangad police station in Kochi.

The police said the action was initiated against Nandakumar on the basis of complaints from various individuals and groups.

The Kotak Mahindra Bank, which had sacked Nandakumar for 'poor performance' on April 11, had on Friday condemned the alleged Facebook comments of its former employee.

"It is extremely disheartening to see such comments being made in the aftermath of such a tragedy by anyone, including an ex-employee. We strongly condemn this statement," bank spokesperson Rohit Rao had said.

Nandakumar, who worked as the assistant manager at a Kotak Mahindra Bank branch here, had allegedly justified the killing of the rape victim, saying she would have grown up to be a terrorist.

'It's better to kill her now, otherwise tomorrow she may become a human bomb against India,' he had allegedly written in Malayalam.

The vile comment had led to an uproar on the social media, with people demanding action against Nandakumar.

Anil Bhatt in Udhampur
© Copyright 2022 PTI. All rights reserved. Republication or redistribution of PTI content, including by framing or similar means, is expressly prohibited without the prior written consent.