Two Bharatiya Janata Party ministers, who were at the centre of a storm over their participation in a rally in support of the accused in the Kathua rape and murder case, on Friday submitted their resignations to the party's state president Sat Sharma.

"Yes, the two ministers have submitted their resignation to me," Sharma told PTI.

He said a legislature party meeting of the BJP is scheduled to be held on Saturday in Jammu where the future course of action on this issue will be discussed.

"We are going to discuss this and other issues at our legislature party meeting tomorrow," Sharma said when asked if he was going to forward the resignations to Chief Minister Mehbooba Mufti.

Opposition National Conference and the Congress had demanded that Mehbooba sack the two ministers.

The rape and killing of the girl, who belonged to the nomadic Bakerwal Muslim community, has become a national issue. The gory details of the heinous crime surfaced following filing of charges.

The girl had disappeared from a spot near her house on January 10. A week later, her body was found in the same area.

A Special Investigation Team, formed to probe the incident, has arrested eight people, including two special police officers (SPOs) and a head constable, who was charged with destroying evidence. 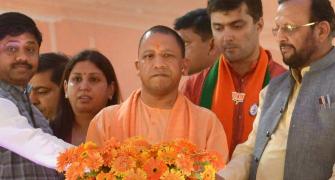