By Mukhtar Ahmad
April 22, 2010 23:14 IST
Separatist groups in Kashmir on Thursday reacted angrily to the death sentence awarded to two locals, who were held guilty by a Delhi court in the 1996 Lajpat Nagar bomb blast case, in which 13 persons were killed.

The moderate and hard-line groups of the separatist conglomerate All Parties Hurriyat Conference, headed by Mirwaiz Moulvi Umar Farooq and Syed Ali Shah Geelani respectively, have called for a protest shutdown on Friday against the death sentence.

Mirza Nissar Hussain, a resident of Shamswari, and Mohammad Ali Bhat from Hasnabad in Srinagar were awarded the death penalty on Thursday. Another local, Javed Ahmad Khan, has been sentenced to life imprisonment by the Delhi court.

The pro-independence Jammu and Kashmir Liberation Front, in a statement, said an 'extra-ordinary meeting of the group has been called on Friday to discuss how to save the lives of the Kashmiri prisoners'.

In a statement, Mehbooba said, 'Kashmir is an unresolved political problem and such tragedies flow out of the inability of India and Pakistan to resolve this six-decade old tragedy'.

She added, "The Lajpat Nagar case is not the first in the long story of bloodshed associated with Kashmir problem, but looking at this problem purely on technical and legal levels would only add to the complexities that have prevented a solution so far".

The Kashmir bar association has supported the bandh call given by the two groups of the APHC. 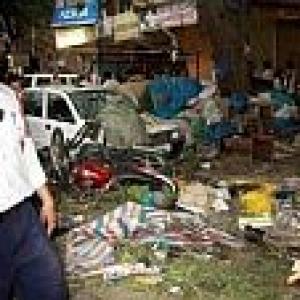