Kashmir: Security beefed up after killing of labourers 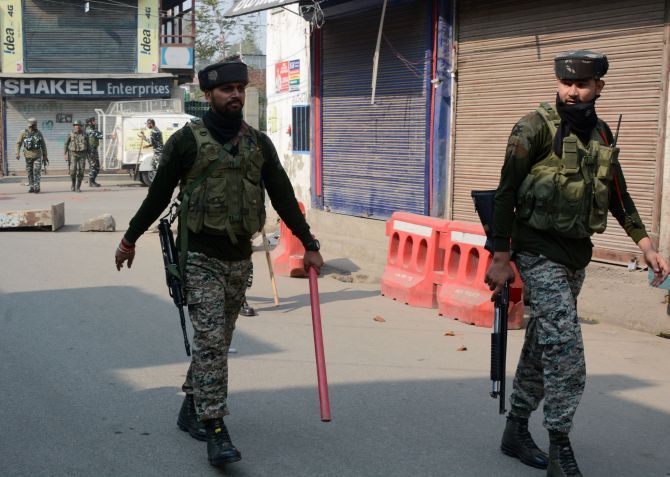 Security has been heightened in Kashmir following the terror attack in Kulgam district that left five labourers from West Bengal dead, even as a complete shutdown disrupted normal life across the valley on Wednesday, officials said.

The terror attack came at a time when a delegation of parliamentarians from the European Union is in Kashmir to talk to locals and ask them about their experience after abrogation of Jammu and Kashmir's special status under Article 370 of the Constitution.

Five migrant labourers in Kulgam district of south Kashmir were shot dead by terrorists on Tuesday night. Another labourer was injured and has been shifted to a hospital Srinagar.

Official said security personnel along with a flying squad have been deployed in several areas of the city and across the valley, especially in South Kashmir.

The officials said random checking of vehicles and frisking of people was being done as part of the security drill.

Security personnel were alert to thwart any attempts by anti-national elements to target non-locals or to derail peace in the valley.

Normal life remained affected across the Kashmir valley for the 87th day on Wednesday following the abrogation of parts of Article 370.

The officials said markets remained closed on Wednesday, while public transport remained off the roads.

Roadside vendors, who had regularly set up their stalls over the past two months, also did not turn up for the second consecutive day on Wednesday, they said.

The annual board examinations for class 10 and class 12 are being held as per schedule.

Class 10 examinations began on Tuesday, while the class 12 exams are scheduled to start from Wednesday afternoon.

Landline and post-paid mobile phone services have been restored across the valley, but all Internet services continued to remain suspended since 5 August.

Most of the top-level and second-rung separatist politicians have been taken into preventive custody while mainstream leaders including two former chief ministers -- Omar Abdullah and Mehbooba Mufti - have been either detained or placed under house arrest.

All help to families of 5 workers killed in Kashmir: Mamata

West Bengal Chief Minister Mamata Banerjee on Wednesday said that all help will be extended to the families of the five workers from Murshidabad district who were killed in terror attacks in Kashmir.

Describing the killings as brutal, Banerjee expressed her shock and grief over the incident.

'We are shocked and deeply saddened at the brutal killings in Kashmir. Five workers from Murshidabad lost their lives. Words will not take away the grief of the families of the deceased,' Banerjee wrote on her Twitter handle.

"All help will be extended to the families in this tragic situation," she added.