The return of around 6,000 paramilitary personnel to Jammu and Kashmir after election duty elsewhere has triggered large scale rumours, ranging from further bifurcation of the union territory to announcement of elections after realigning districts, for the last three days. 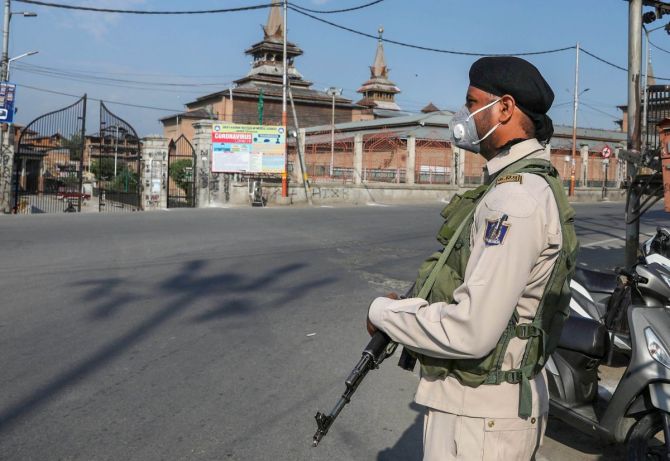 The wave has not left even mainstream politicians untouched with People's Conference chief Sajjad Lone, who has again found himself in favour with quarters in the central government, tweeting, 'Seems all rumours rumoured to b rumours are rumoured to have been rumours after all. But rumours r still rumouring.'

The rumours started spreading after the return of around 60 companies of the paramilitary force who had been stationed in the union territory since August 5, 2019, the day Jammu and Kashmir's special status was revoked and the state was bifurcated into union territories.

Officials said that these paramilitary companies were returning to their stations after completing election duty in West Bengal and Tamil Nadu.

However, the movement of troops and a series of meetings, including Lt Gov Manoj Sinha's deliberations with Home Minister Amit Shah and officials in Delhi since Saturday, fuelled the rumours and repeated attempts by officials were failing to put an end to it.

Additional Director General of Police Mukesh Singh, who is at present holding the charge of Jammu region, took to Twitter to rule out any fresh deployment of forces but his assertion found no takers on social media.

Many social media users talked about further splitting of Jammu and Kashmir, with Jammu being given a status of state and Kashmir remaining as a union territory.

Residents of Kashmir Valley repeatedly enquired about the possibility of any shutdown of internet and phone services, the steps taken by the Centre before the Jammu and Kashmir Reorganisation Bill was placed in Parliament and Article 370 was virtually abrogated.

The sudden visits of JK Apni Party chief Altaf Bukhari and Lone to Delhi have added fresh fuel to the rumours.

Lone returned to Srinagar quietly on Friday evening, and tweeted on Saturday 'woke up to a lovely morning in Srinagar only to find out on Twitter that I am in Delhi' and attempted to dismiss the conjectures.

Some politicians were seen enquiring whether the reports about the MLA hostel in Srinagar being cleaned up for their fresh lodging were true.

Senior National Conference leader Tanvir Sadiq tweeted, 'While rumours are flying thick and fast - should we be ready for second semester? MLA's hostel 2.0?'

The MLA hostel was a sub-jail where politicians had been detained for several months after the Centre's action of August 2019.

Senior journalist Fahad Shah tweeted, 'Top police officers, bureaucrats, officials (who were part of recent meetings) all say rumours in Jammu and Kashmir are baseless. Only time will tell though. People are reminded of August 2019 every time there are such rumours. Back then the governor had said everything was fine.'

The return of paramilitary forces is also attributed to the annual Amarnath Yatra scheduled to start from June 28 this year.

It was not immediately clear whether the pilgrimage will be held this year considering the coronavirus pandemic situation or curtained or cancelled altogether.

Last year, the pilgrimage was cancelled due to the pandemic and in 2019, it was curtailed because of the Centre's decision of August 2019.