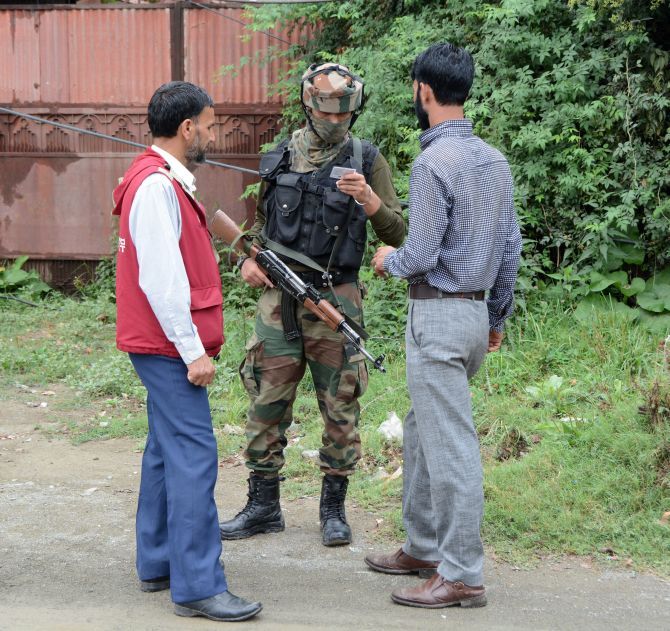 IMAGE: A security jawan checks identity cards of youth during the the 51st day of curfew in downtown Srinagar. Photographs: Umar Ganie/Rediff.com

Curfew continued in some parts of Srinagar and two towns in south Kashmir, while restrictions on the assembly of people were in force in the rest of the Valley where normal life remained paralysed for the 51st consecutive day on Sunday.

He said the curfew was lifted from many areas of Srinagar on Sunday -- two days after it was clamped in the entire city to thwart proposed marches by separatist groups to Eidgah in old city on Friday and towards Army headquarters at Badami Bagh cantonment area in Srinagar on Saturday.

The official said curfew also continued in the two south Kashmir towns of Pulwama and Pampore.

He also said restrictions on assembly of people were in force in rest of the Valley to maintain law and order. 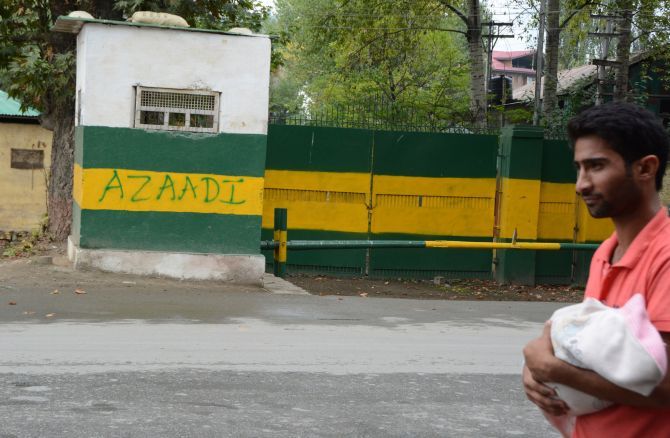 IMAGE: A man carries a baby as he walks past an Army bunker during curfew in Srinagar on Sunday.

At least 25 persons were injured in clashes between protestors and security forces in Kashmir on Saturday as the death toll in the ongoing unrest, in the wake of killing of Hizbul Mujahideen commander Burhan Wani in an encounter with security forces on July 8, reached 68.

Shops, private offices and petrol pumps remained closed on Sunday as well, while public transport continued to be off roads, the official said.

They have asked the mosque committees in all villages and localities to visit people to assess their needs.

Also visit the families of those killed and injured, and make arrangements for their support, the separatists said in their weekly protest programme.