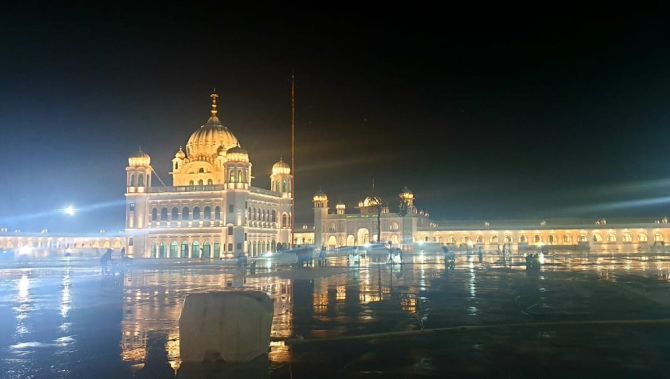 Pakistan Prime Minister Imran Khan on Sunday shared some of the dazzling pictures of the Kartarpur complex and Gurdwara Darbar Sahib, saying the revered venue is ready to welcome the Sikhs pilgrims for the 550th birth anniversary celebrations of Guru Nanak.

The pictures were shared by Khan on his Twitter account ahead of the planned inauguration of the Kartarpur corridor on November 9.

'Kartarpur (is) ready to welcome Sikh pilgrims,' he tweeted.

In another tweet, he congratulated his own government for completing the construction work on time.

'I want to congratulate our govt for readying Kartarpur, in record time, for Guru Nanak jee's 550th birthday celebrations,' he said.

It appears that Khan is trying to sell the idea of religious tourism by attracting millions of Sikhs who have several holiest places in Pakistan.

Earlier, he also abolished the condition of passport for the Sikhs coming to Kartarpur and the service fee of $ 20 dollars for those coming for the inaugural ceremony and on the 550th birth anniversary of the Sikh Guru on November 12.

The proposed opening of the corridor coincides with the presence of tens of thousands of protesters in the capital Islamabad.

Their leader Maulana Fazlur Rehman had demanded resignation of Khan as conditions to disperse peacefully.

Meanwhile, Ahsan Iqbal, a leader of Pakistan Muslims League-Nawaz and ally of Rehman, on Saturday criticised the move of Khan to allow Sikhs from India enter into Pakistan without passport.

Iqbal said Kartarpur opening was a good gesture but 'lifting condition of passport for foreigners like Indians was a blunder'.

Sajjad Hussain in Islamabad
© Copyright 2022 PTI. All rights reserved. Republication or redistribution of PTI content, including by framing or similar means, is expressly prohibited without the prior written consent.