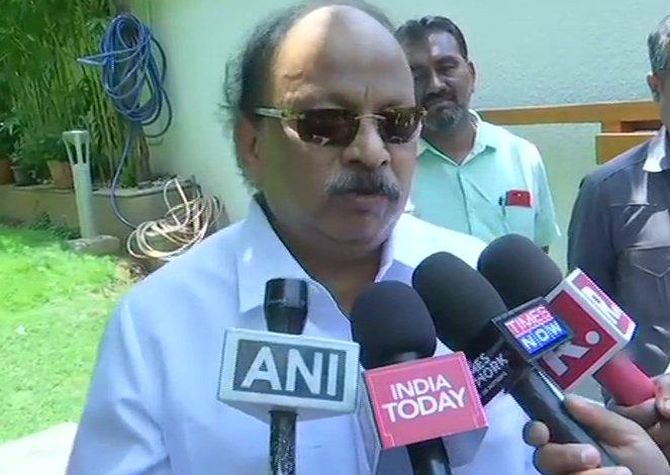 "Today I have submitted my resignation from the Karnataka Assembly to the Speaker," Baig told reporters at Vidhana Soudha after coming out of the office of Speaker K R Ramesh Kumar.

The suspended Congress MLA made it clear he would not fly to Mumbai or Delhi, unlike the other disgruntled MLAs who have camped in a Mumbai hotel.

"I am not going to Mumbai or Delhi. Being the chairman of the State Hajj committee, I am going to the airport to oversee arrangements for the Hajj pilgrims," Baig said.

To a question as to whether his party colleagues spoke to him, Baig said, "They said 'hello' to me. That's it."

The MLA was suspended from Congress for his alleged anti-party activities as he had rebelled against the party leaders.

So far 14 MLAs have resigned, which includes 11 from the Congress and three from the JD-S.

On the other hand, BJP's strength as of now stands at 107.

"His resignation is also against the party. I appeal to all those who have resigned to come back and not fall prey to BJP's designs," Siddaramaiah told reporters while staging a demonstration near the Mahatma Gandhi statue Bengaluru against the BJP's alleged attempts to destabilise the coalition government.

Baig has recently been accused by IMA group founder, Mohammad Mansoor Khan, who is absconding, of taking Rs 400 crore from him and not returning it.

Baig has categorically rejected the charge, saying the issue surfaced because of his fallout with some of his political adversaries.