The Karnataka high court, which dismissed a batch of petitions by some Muslim girls from Udupi seeking permission to wear the hijab inside classrooms of  educational institutions, framed the entire case in the form of four questions and answered them accordingly. 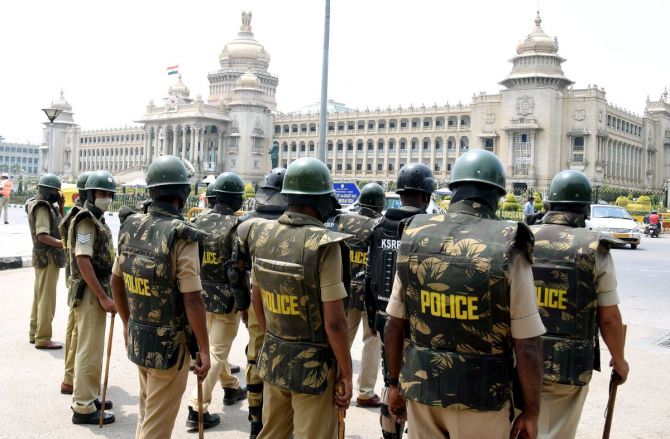 The proceedings had started from February 8, initially by a single judge bench of Justice Krishna S Dixit for two days and then by the full bench comprising Chief Justice Ritu Raj Awasthi, Justice Dixit and Justice J M Khazi.

The bench, which heard the case on a day-to-day basis, said it formulated four questions and answered them accordingly, taking a holistic view of the entire matter.

The question for considerations were, whether wearing hijab or head-scarf is a part of "essential religious practice" in Islamic faith protected under Article 25 of the Constitution.

"Our answer to the first question is, we are of the considered opinion that the wearing of hijab by Muslim women does not form a part of essential religious practice in Islamic faith," the CJ read out from the order.

The second poser was whether prescription of school uniform is not legally permissible, as being violative of petitioners fundamental rights inter alia guaranteed under Articles, 19(1)(a) related to freedom of expression and 21, dealing with privacy, of the Constitution.

"The answer to this question is that we are of the considered opinion that the prescription of school uniform is only a reasonable restriction constitutionally permissible which the students cannot object to," the bench said.

Regarding the third question arising out of the petitions, whether the Karnataka government's order dated February 5, apart from being incompetent, is issued without application of mind and further is manifestly arbitrary and therefore, violates Articles 14 and 15 of the Constitution?

The petitioners had challenged quashing the government order which banned wearing any cloth that could disturb peace, harmony and public order.

"We are of the considered opinion that the government has power to issue the impugned order dated February 5, 2022, and that no case is made out for its invalidation," the bench noted.

The fourth question was regarding issuance of a direction for initiating disciplinary enquiry against respondents including the Government PU Girls College in Udupi, its principal and teacher.

Regarding the prayer to initiate an inquiry by the premier investigation agencies such as the Central Bureau of Investigation or the National Investigation Agency, the bench said the writ petitions filed as public interest litigations are liable to be rejected and "absolutely no case having been made out for indulgence".

"In the above circumstances, all these petitions being devoid of merits, are liable to be and accordingly are dismissed. In view of dismissal of these writ petitions, all pending applications pale into insignificance and are accordingly, disposed off," the bench said.