There are protests galore in Karnataka over the Cauvery water release issue and there appears to be no solution in sight with farmers only intensifying their protest with each passing day.

The Cauvery water issue has always been political in Karnataka and those who have defied Tamil Nadu's demands have always made gains politically.

A question that many would ask is why the ruling Bharatiya Janata Party in Karnataka did not capitalise on the issue and stop the release of water? While any such move by Karnataka would have earned the wrath of the Supreme Court, it would still have been beneficial for the party politically.

The fact is that the Karnataka BJP had first planned on defying the order of the Cauvery River Waters Authority which ordered the release of 9,000 cusecs of water to Tamil Nadu.

Even after the Supreme Court decision to release the water, many leaders in the state had said that they should stand by the demands of the farmers and defy the order even at the risk of losing power.

This was a well thought out move by the Karnataka leaders and by doing so they would have gained politically especially in the Mandya and Mysore belts which have predominantly been weaker areas for the BJP.

This is a region which has always protested against the release of Cauvery water to Tamil Nadu as they have been the most affected.

While the state BJP had planned on defying the order and standing by the farmers of this belt, it was the central leadership which finally put its foot down and stated that the order has to be followed.

While the BJP leaders from Karnataka argued that it would put them in bad light if they followed this order, the central leadership was adamant that there shall be no disobeying of the apex court.

The BJP central leadership considered the issue on a national front and did not want to be accused of not upholding the rule of law.

While defying the order may have helped the BJP make inroads in the Mandya and Mysore belts especially with the elections round the corner, the central leadership was firm and pointed out that the party would be seen in very bad light nationally.

The central leadership argued that they would be left defenceless in Parliament against the Congress who would pick on them. In addition to this the BJP in New Delhi also did not want to rub Tamil Nadu CM J Jayalalithaa the wrong way as they see her as a possible ally.

Karnataka CM Jagadish Shettar and his men reluctantly agreed to the orders of their leaders and decided to go ahead and release water to Tamil Nadu.

Many state that they could face what S M Krishna faced when he was encountered with the same problem while he was the chief minister of Karnataka.

He too had initially tried defying the order citing law and order problems. The Supreme Court however tore into him and told to either rule or quit.

Krishna went ahead and released water which led to major rioting. The situation was so bad for him that he could not even contest from his home constituency of Maddur which is close to Mandya.

The Congress eventually lost that election under Krishna. They were forced to form a government with the Janata Dal-Secular with Dharam Singh as the chief minister, which only lasted two years.

However, the rest of the parties especially the JD-S is trying to make gains out of the issue. The JD-S has played this card very smartly. While the big man Deve Gowda has said that the rule of law should be upheld, the rest of his party leaders have joined the protests.

All of them have tendered their yet-to-be-accepted resignations in support of the Cauvery issue. The JD-S hopes to make up for lost ground in the areas of Mysore and rural Bangalore through this issue. 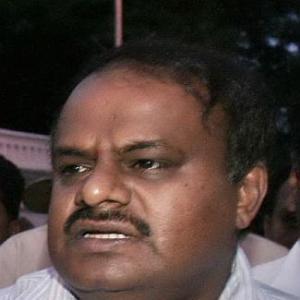 Karnataka farmers to go on hunger strike against Cauvery order