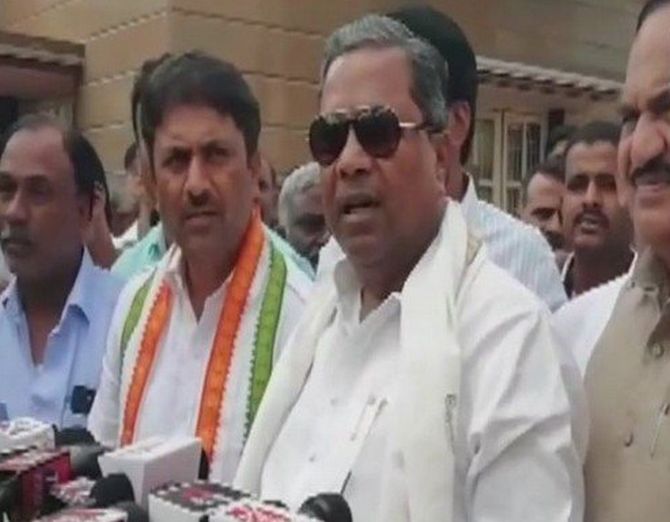 IMAGE: Congress Legislature Party leader Siddaramaiah served a second notice to the MLAs who did not turn up for the CLP meeting. Photograph: ANI

Ignoring whip, nine Congress MLAs in Karnataka skipped the legislature sitting on Wednesday, keeping the ruling coalition on tenterhooks on the opening day of the budget session.

MLA J N Ganesh, who is declared absconding after an alleged brawl with a colleague lawmaker at a resort recently, was among the absentees.

The whip asking all ruling coalition legislators to be present on all days of the budget session of the assembly was issued on Tuesday amid allegations of renewed bid by Bharatiya Janata Party to destabilise the Kumaraswamy ministry.

The joint session of the legislature began on a stormy note with the opposition BJP questioning the legitimacy of the Janata Dal-Secular-Congress government.

Unruly BJP members created a ruckus disrupting the address of Governor Vajubhai Vala, forcing him to cut short his speech and read the last paragraph.

“We don’t want a bundle of lies to be read. Down down... the government that has lost majority and trust,” BJP members said shouting down Vala.

Stung by the MLAs’ absence, Congress Legislature Party leader and former chief minister Siddaramaiah issued another whip Wednesday to party MLAs asking them to “compulsorily” attend the session between February 6 and 15.

Speculations are rife that the four MLAs are still in touch with the BJP and may jump ship, as they have not yet responded to the second notice issued by Siddaramaiah asking them to appear before him and explain their absence from the CLP meeting.

The MLAs had, however, replied pledging their complete loyalty to the party, in response to the first notice.

MLAs being absent from the House Wednesday despite the whip and warning of strict action has caused serious concern to the edgy ruling Congress-Janata Dal-Secular coalition in the state.

Four BJP lawmakers were also absent but the party sources said they had obtained prior permission.

A JD-S MLA also did not show up.

Frontline Karnataka minister D K Shivakumar hit out at the BJP for showing disrespect to the Governor “out of frustration”, on not being successful to come to power.

“We are aware what three to four BJP MLAs are doing sitting in Mumbai, our party will take a call on it,” he said. Minister K J George challenged the BJP to move a no-confidence motion and said all MLAs were with Congress party and were together.

Amid allegations of renewed bid by BJP to destabilise the Kumaraswamy ministry, a whip was issued to all MLAs of ruling coalition Tuesday to be present in the assembly during all days of the budget session and support the government.

Speaking to reporters, BJP state president and Leader of Opposition B S Yeddyurappa said the coalition has no moral right to stay.

He said his party would not move a no-confidence motion and that “the true colours” of the government would come out during the budget session.”

“Congress-JD(S) legislators are fighting against each other,” he said.

Alleging that the government tried to make the Governor ‘lie’ in his customary address, he said, that was the reason for the BJP protest.

Claiming that more than 20 Congress legislators had earlier openly said that they would not accept Kumaraswamy as their chief minister, he said, “leave aside people having trust in him, his own MLAs don’t have trust in the CM.

“According to numbers that I have gathered today, about10-11 Congress MLAs did not attend the House,” Yeddyurappa claimed adding Kumaraswamy also didn’t have trust in his MLAs.

The former chief minister said the BJP’s plan of action in the assembly would be decided at the legislature party meeting and “we will make it known on Thursday morning.”

According to BJP sources, the party would continue its agitation against the government in the assembly and during budget presentation on Friday.

Kumaraswamy, who holds the finance portfolio, is scheduled to present the coalition government’s second budget.

The saffron party has already expressed doubts about budget presentation, with senior leaders like R Ashoka claiming that 20 to 25 disgruntled MLAs of the alliance were
out of reach of their leaders.

This is the first session after the cabinet expansion in December that brought to fore dissidence in the Congress and political turmoil that engulfed the state following BJP’s alleged bid to poach disgruntled legislators of the ruling coalition.

The crisis last month that saw return of resort politics was triggered by a few Congress MLAs reportedly camping in Mumbai along with BJP leaders, amid reports that they might switch sides to the saffron camp.