Prime Minister Narendra Modi on Saturday asserted that India will not succumb to any pressure or influence in matters of national security, as he emphasised the importance his government gives to the armed forces. 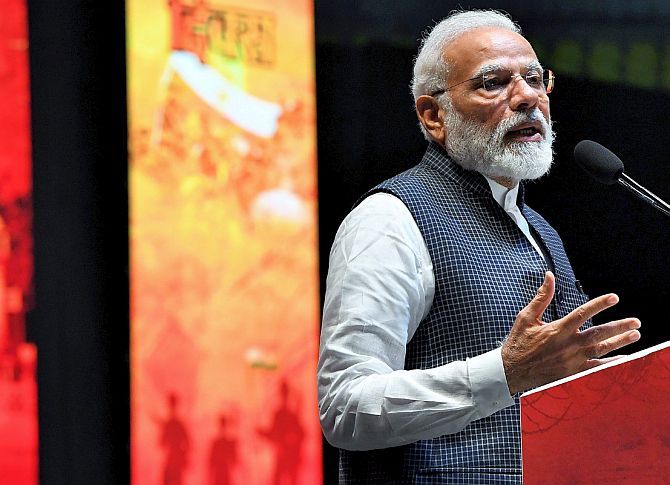 In an address at an event to mark the 20th anniversary of Kargil War, Modi also sent out a strong message to Pakistan against repeat of such misadventures, saying the Indian Armed Forces had defeated the neighbouring country's evil designs two decades back.

He said conflicts in today's time have reached space and the cyber world.

"The Armed Forces must be modernised and it is also our priority. We will not succumb to any pressure or influence in the matters of national security. (Rashtra ki suraksha ke liye na kisike dabav mein kaam hoga, na prabhav mein aur na hi kisi abhav mein). From deep sea to the infinite universe, India will use its competency to the fullest," he said.

"We have been taking steps for safeguarding the country's security interests and to protect our resources, and we will continue to do that," the prime minister added. 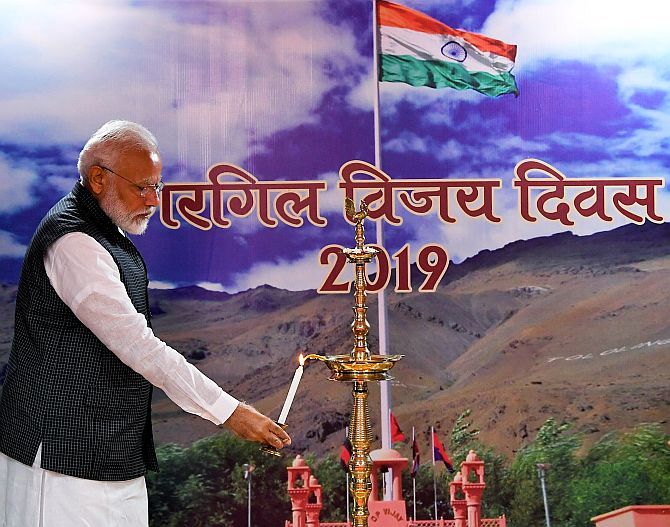 He asserted that India has never been an aggressor and the Indian Armed Forces are perceived as defenders of humanity and peace across the world.

In a reference to Pakistan, he said those who were defeated in war, are resorting to proxy war and supporting terrorism today to achieve their political objectives.

The need of the hour is that all those who believe in humanity, should stand in support of the armed forces and this is essential to effectively counter terrorism, he said.

Recalling the resolve of former prime minister Atal Bihari Vajpayee for an effective response to Pakistan, Modi said the neighbouring country had no answer to that.

Referring to the Delhi-Lahore bus service and the other steps taken by Vajpayee for betterment of ties, the prime minister said the peace initiative of that government had led to a better understanding of the rest of the world about India's position on the issue. 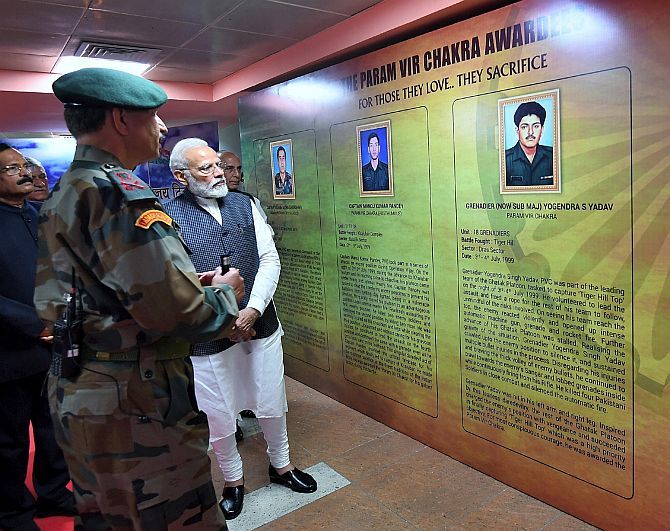 IMAGE: Modi at the Kargil Vijay Diwas event. Recalling the sacrifice of the Indian soldiers during the Kargil war, Modi said it was a symbol of India's might and its security will remain impregnable with dedication of the armed forces. Photograph: PIB/PTI Photo

Recalling the sacrifice of the Indian soldiers during the Kargil war, Modi said it was a symbol of India's might and its security will remain impregnable with dedication of the armed forces.

"Kargil victory was a symbol of India's might, determination and capability," he said in presence of a large number of military personnel and ex-servicemen at the event in New Delhi.

Modi said he had also visited Kargil when the war was at its peak and it was like a pilgrimage to him.

He stressed on the importance of "jointness" among the three wings of the armed forces. Modi said the armed forces are being rapidly modernised, and efforts are being made to increase the participation of the private sector for "Make in India" in the defence sector.

He also mentioned the establishment of India's nuclear triad through Arihant, and the testing of A-SAT - the anti-satellite test.

Modi said infrastructure is being strengthened in the border areas.

He spoke of steps being taken for the development of border areas, and the welfare of people living there.

"Development is possible only if country is secure... We will not come under any pressure when it comes to national security," he said.

Modi also mentioned the decisions his government has taken for betterment of the armed forces personnel, including the One Rank One Pension, enhanced scholarship for wards of martyrs and building the National War Memorial.