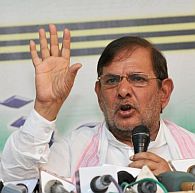 Leaders remained tight-lipped on what transpired during the conversation. The development comes a day after senior CPI-M leader Sitaram Yechury called on Yadav at his residence amid talks of non-Congress and non-BJP parties coming together for the next general elections.

CPI-M, whose strength came down sharply from 44 in the last Lok Sabha to 16 now, has decided to project Left and secular forces as an alternative to Congress and BJP-led formations.

After the meeting, Yechury had on Friday said that Left parties want unity of parties on the basis of alternative policies.

Asked whether the Left would join a Third Front, he said it "depends upon the programme and policies" of such a platform.

Karat had on Thursday ruled out any effort by the Left to forge a third front and said the electoral strategy would only be to have a temporary arrangement based on seat adjustments and tactics.

To questions on formation of a front, Yechury had earlier said, "Merely calling for fronts....fronts don't appear. They can't be created from the atmosphere.

"You have to create an alternative quality framework and when you see any non-Congress, non-BJP government coming, it has to come out with such an understanding," he had said.

BJP President Rajnath Singh and its Leader of Opposition Sushma Swaraj also spoke to Yadav yesterday. Though Yadav still appeared hopeful of a resolution, the escalating tension between BJP and JD(U) on the issue of Narendra Modi has left little room for a rapprochement.