Kanpur encounter: ADG says lapses on part of cops will be probed

Additional Director General (ADG) Law and Order Prashant Kumar on Friday visited the encounter spot in Bikaru village where eight police personnel lost their lives after being fired upon by criminals and stated that if there has been any lapse on the part of the police, it will be investigated. 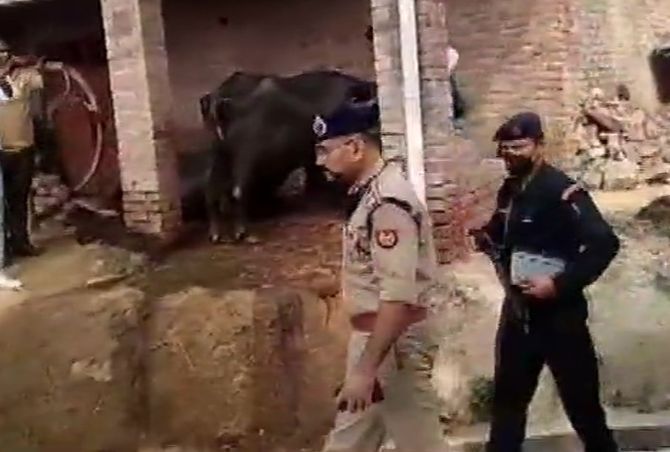 IMAGE: ADG Law and Order Prashant Kumar visits spot of encounter in Bikaru village where eight police personnel lost their lives after being fired upon by criminals. Photograph: ANI

"Seven other persons including a civilian were also injured in the incident. Few police weapons are also missing.

"Those responsible for the act will be caught and produced before the law. If there has been any lapse on the part of the police, it will be investigated," said ADG Law and Order Prashant Kumar.

Meanwhile, Uttar Pradesh Director General of Police H C Awasthi said that the operation is still underway to nab the criminals who had fled after shooting at the police.

"A case under Section 307 was lodged against history-sheeter Vikas Dubey by a man named Rahul Tiwari and the police had gone to arrest him in a village called Bikaru.

"JCBs were put up there which obstructed our vehicles. When the force got down, criminals opened fire. We retaliated but since the criminals were at a height, eight of our men died." the DGP told ANI.

"The forensic team from Kanpur was at the spot, an expert team from Lucknow is also being sent. The Kanpur Special Task Force (STF) is already at work.

"A large scale operation is being carried out. This is in continuation with the operation for which the team had gone there in the first place," he added.

Uttar Pradesh Chief Minister Yogi Adityanath has expressed condolences to the families of the eight police personnel who lost their lives in the incident.

He has directed the DGP to take strict action against criminals and sought a report of the incident.