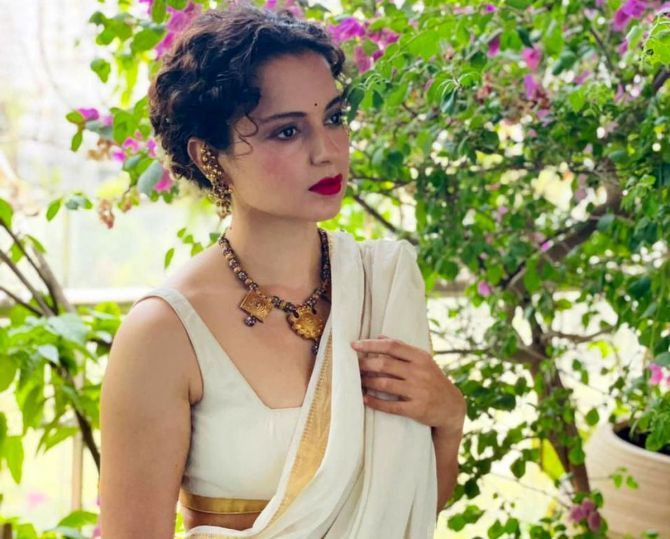 A Twitter spokesperson said in a statement that Ranaut's account has been 'permanently suspended for repeated violations'.

It, however, did not specify the tweet(s) that triggered the action.

Ranaut, known for her often inflammatory tweets, had posted several messages following the Mamata Banerjee-led Trinamool Congress' win over the Bharatiya Janata Party in West Bengal and incidents of post-poll violence. Calling for President's Rule in the state, she also blamed Banerjee for the violence and called her unpublishable names.

'We've been clear that we will take strong enforcement action on behavior that has the potential to lead to offline harm,' the Twitter spokesperson said.

According to Twitter's Abusive Behaviour policy, 'one may not engage in the targeted harassment of someone, or incite other people to do so or attempt to harass, intimidate, or silence someone else's voice'.

Many social media users called Ranaut out for spreading hatred.

Though silenced on Twitter, the actor, who was last year awarded Y-plus category security by the government, posted a video on Instagram on Tuesday.

She termed the apparent silence of the liberal international media on Bengal violence their 'conspiracy against India'.

In her Instagram stories, Ranaut shared a screengrab of her statement to the media on her account suspension.

One fallout of Ranaut's provocative tweets was fashion designers Anand Bhushan and Rimzim Dadu announcing they were removing all her images from their social media channels. They also pledged never to work with her.

'In view of certain events today, we have taken a decision to remove all collaboration images with Kangana Ranaut from our social media channels.

'We also pledge never to be associated with her in any capacity in the future. We as a brand do not support hate speech,' Bhushan wrote on Twitter.

Dadu's official Instagram handle shared a brief statement, saying the brand will be 'removing all posts of past collaborations with Kangana Ranaut'.

'Never too late to do the right thing! We are removing all posts of past collaborations with Kangana Ranaut from our social channels and pledge to not engage in any future association with her,' the statement read.

On Monday, writer-lyricist Hussain Haidry had shared two tweets of the actor and urged people to report the account.

'If you are a blue tick account or with large following, I am not asking you to speak up against this. But please just quietly REPORT these two tweets. This is calling for mass violence. And directing it at Muslims,' he wrote.

Actor Swara Bhasker tweeted in support of the designers, saying she is 'pleasantly surprised' by their decisions.

'Pleasantly surprised to see this! Kudos to you @AnandBhushan & #RimzimDadu for calling out hate speech and incitement to genocide in a direct manner! Stand tall you guys!' she wrote.