Actors Diljit Dosanjh and Kangana Ranaut were embroiled in a bitter war of words over the farmers' protest on Thursday, a Twitter spat that began with Shaheen Bagh protester Bilkis Bano but soon spilled over to name calling, Punjabi identity, the Delhi riots and even some muscle flexing over the mother figure. 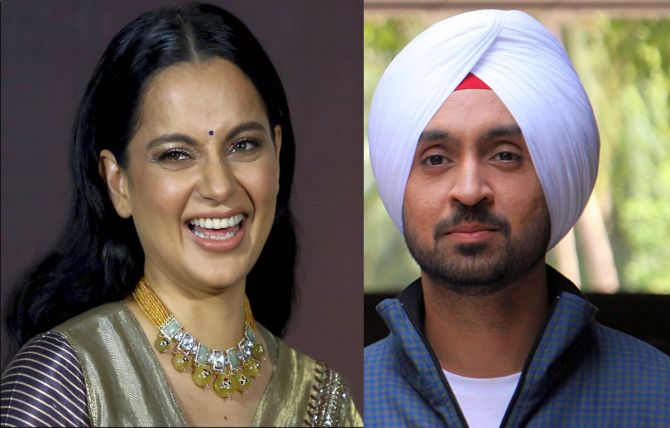 The two, one a celebrity singer-actor from Punjab and the other a Bollywood star known for her combative comments, began bickering on the social media platform on Wednesday evening and continued till well into Thursday.

Earlier this week, Ranaut misidentified a woman farmer from Punjab as Bilkis Bano, the octogenarian who made international headlines during the anti-Citizenship Amendment Act protests earlier this year in the Delhi neighbourhood of Shaheen Bagh.

She shared a tweet alleging that the 'Shaheen Bagh dadi' also joined the farmers' agitation over the new agri laws at various border points of the national capital.

She retweeted the post with pictures of two elderly women, including Bilkis Bano, and wrote that the "same Dadi" who featured in Time Magazine was "available in 100 rupees".

The floodgates opened after that.

Dosanjh shared a BBC interview of the woman who Ranaut had wrongly identified as Bilkis Bano and tweeted on Wednesday that her name is Mahinder Kaur.

"Listen to this with proof, Kangana. One shouldn't be so blind... You are saying just about anything," the actor, who hails from Dosanjh Kalan village near Jalandhar, Punjab, said in Romanised Punjabi.

As the protest by farmers, mostly from Punjab and Haryana, gathered momentum, he found support from fellow Punjabi star singers Ranjit Bawa and Himanshi Khurana.

In the vitriolic exchange that followed, Ranaut called Dosanjh filmmaker Karan Johar's "pet", a “bootlicker” and asked if he wasn't ashamed of defending somebody who “instigated” the Delhi riots earlier this year. She also said her comments were directed towards Bilkis Bano and not Mahinder Kaur, someone she said she didn't even know.

Dosanjh, a popular name in Punjabi films who shot to national fame with the 2016 drug drama Udta Punjab, in turn asked if she was a sycophant of everyone she has worked with. "Then the list will be long," he said.

"… These people aren't from Bollywood, they are from Punjab. You know how to lie and instigate people by playing with their emotions," he added.

Asserting his Punjabi identity, Dosanjh said Ranaut, even as a woman, doesn't have the manners to talk to someone's mother or sister.

"Our mothers are god for us. You have stirred up a hornet's nest. Google the Punjabi."

"Every word you say is like that, what do you want? They are like God for us. Did nobody teach you any etiquette of speaking? Punjabis will teach you how to speak to those who are elder to you," he added.

And so it went on.

Responding to a tweet by Congress MP from Ludhiana Ravneet Singh Bittu, who has asked Punjab chief minister Amarinder Singh to initiate FIRs against Dosanjh and singer Jazzy B among others for being 'Khalistani elements' hijacking the agitation,Ranaut said he was revealing the truth about "terrorists".

"… Sycophant and terrorists want to divide this country. They are dragging dadi without any reason to set their agenda. Shame on tukde gang..." she said.

In response, Dosanjh said it was she who stood to gain something here and everyone knew she was going to join politics.

When Ranaut called Punjab "the heart of the country" which needed to be rid of "terrorists", Dosanjh said India was not hers alone.

He also accused Ranaut of trying to derail a peaceful protest.

Fellow singer Ranjit Bawa waded in with his view and said, "We all love him. Sardars aren't anyone's slaves. We have come up on our own."

Khurana, who featured on the last season of Bigg Boss, also replied to a tweet of Dosanjh and wrote that Ranaut had blocked both her and Bawa for calling her out.

"She blocked me, Ranjit Bawa but didn't block you Diljit... Because she wanted to pass that comment about Karan to you. Opportunist..." she wrote.

Thousands of farmers have gathered at Delhi's gateways to demand a repeal of the Centre's three new farm laws. The protesting farmers are worried the new laws will eliminate the safety cushion of a Minimum Support Price and procurement system, while rendering ineffective the mandi system that ensures earnings for various stakeholders in the farm sector.

The government has been in talks with farmer leaders to resolve the issue.