The Bombay high court on Friday held that demolition carried out by the Brihanmumbai Municipal Corporation (BMC) at actor Kangana Ranaut's bungalow in Mumbai was illegal and smacked of malicious intent. 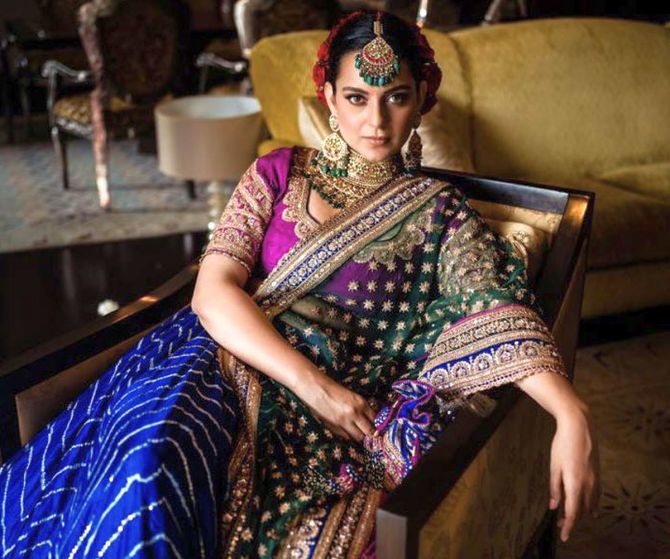 The court appointed an assessor to evaluate the damage caused so as to decide Ranaut's claim for compensation.

The high court also came down heavily on Shiv Sena MP Sanjay Raut over his tirade against Ranaut.

The Bollywood actor termed the decision as a 'victory of the democracy'.

But in the ruling, the bench of Justices S J Kathawalla and R I Chagla also advised Ranaut to observe restraint while expressing herself.

The BMC started demolition of alleged unauthorized construction at Ranaut's Palli Hill bungalow on September 9 following a controversy over her tweet comparing Mumbai to Pak-occupied-Kashmir.

She moved the HC on the same day, seeking to declare the action illegal.

The HC stayed the BMC's action but by then a part of Ranaut's bungalow had already been pulled down.

Following Ranaut's tweet, Sanjay Raut had threatened to teach her a lesson.

Soon thereafter the BMC issued a stop-work notice under section 354 A of the Municipal Corporation Act. It rejected Ranaut's reply and next day part of the bungalow was demolished.

The photos from the site, documents on record and the chain of events showed that the BMC's action was 'predetermined', 'mala fide', (with dubious intentions) and in breach of a citizen's rights, the HC said on Friday.

"The manner in which the action was carried out leaves no doubt that using section 354 was unauthorised, bad in law and aimed at preventing the petitioner from taking recourse to preventive legal action," the bench said.

'Irresponsible statements made by a citizen in an individual capacity, however distasteful, are best ignored ....Illegal and colourable action/s on part of the state or its agencies vis--vis a citizen, is far too serious and damaging to society to be overlooked,' the HC said.

Whether it is unauthorised construction or irresponsible statements hurting the sentiments, no action against the individual by anyone, 'much less by the state, can lie except within the four corners of law', the HC said.

'By no means, colourable exercise of power or resort to threats, use of muscle power and/or causing of injury by unlawful means to such person or to his/her property, can be permitted in any civil society....Such actions are the very antithesis of the rule of law,' the bench said.

Commenting on Raut's role, the court said that the Sena leader 'without being bothered that the rule of law should always prevail, was determined to teach a lesson to the Petitioner (Ranaut)'.

'Such conduct does not befit a leader like Shri Raut, who is also a Parliamentarian,' it said.

The BMC's stop-work notice to Ranaut was illegal, it said, and quashed it.

'The court is convinced that the notice dated 7th September, the action of demolition following it on 9th September 2020 are actuated by mala fides, and in any event, involve a clear malice in law,' it said.

The court permitted Ranaut to make the bungalow habitable again in accordance with sanctioned plans, and to apply to the BMC to get regularised any portions that might not be authorised.

The HC, however, also said it did not 'countenance unauthorised construction', and it also disapproved of 'loose and irresponsible statements against any individual, authority or government'.

'We do not accept as true any of the statements/ allegations made by the petitioner through her tweets with regard to the alleged prevailing atmosphere in the state or the state Police, or against the film industry.

'....the Petitioner should be better advised to exercise restraint when as a 'public spirited person', she airs her views regarding issues of public importance on social media platforms,' the bench said.

The court asked Ranaut's counsel Dr Birendra Saraf to ask her to 'carefully go through' the court's clarification on her tweets.

'Thank you everyone who gave me courage and thanks to those who laughed at my broken dreams. It's only cause you play a villain so I can be a HERO.'

Ranaut had sought Rs two crore as damages from the BMC.

The HC appointed M/s Shetgiri and Associates as valuer to assess the damage and help it award compensation to her.

It will decide after the valuation if a part of the amount should be recovered from BMC officials, it said.