Indian-origin Kamala Harris has surged to the second spot among more than 20 Democrats vying for their party's nomination for the 2020 presidential election after her standout performance in the first Democratic presidential debate, according to a latest opinion poll. 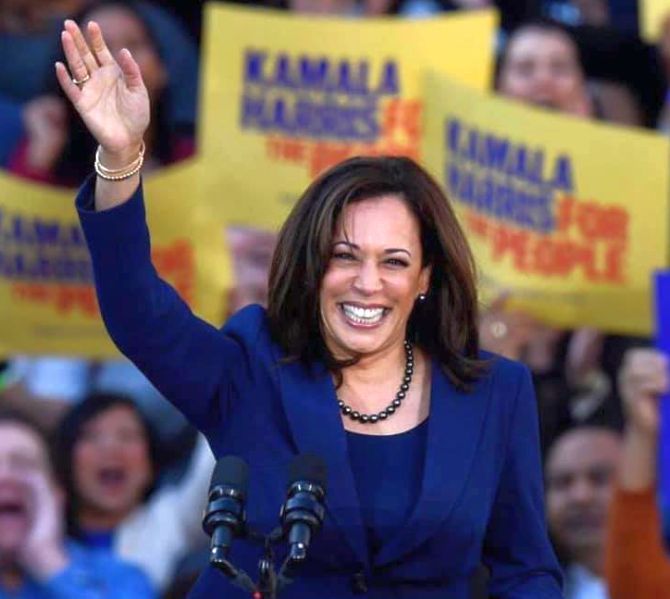 Harris, 54, the first Indian-origin American Senator, soared to 20 per cent in the Quinnipiac University survey, while former US Vice President Joe Biden fell to 22 per cent among Democrats and Democratic-leaning voters.

It is a significant change from a Quinnipiac poll released last month that showed Biden leading the pack with 30 per cent and Harris lingering in a distant fourth place with 7 per cent support.

The Quinnipiac survey is the latest in recent days to show Harris riding a wave of new support following her standout performance in Thursday's debate.

A rising Democratic Party star and vocal critic of President Donald Trump, Harris, if elected, would be the first woman and woman of colour to be the President of the United States.

The Indian-origin Senator, whose mother was born in Tamil Nadu and father was an African-American from Jamaica, in January launched her campaign for the presidential election.

According to the Quinnipiac (KWIN-uh-pea-ack) University National opinion poll, Massachusetts Senator Elizabeth Warren follows at 14 per cent, Vermont Senator Bernie Sanders is at 13 per cent, and South Bend Mayor Pete Buttigieg gets four per cent.

No other candidate tops three per cent.

But among women, Harris has a slight edge with 24 per cent to Biden's 22 per cent. The race is similarly close for white Democratic voters, with Biden at 21 per cent, and both Harris and Warren at 20 per cent.

"Harris also essentially catches Biden among black Democratic voters, a historically strong voting bloc for Biden, with Biden at 31 per cent and Harris at 27 percent," the opinion poll said.

"Round 1 of the Democratic debates puts Harris and former Biden on two different trajectories, as support for Harris surges but continues to slip for Biden," Mary Snow, Quinnipiac University Polling Analyst, said.

The Indian-origin Senator, whose mother was born in Tamil Nadu and father was an African-American from Jamaica, in January launched her campaign for the US presidential election in 2020 to take on President Trump, who is a Republican.

She had said that she was "honoured" to announce her bid on a day when Americans celebrated Martin Luther King Jr who sought inspiration from Mahatma Gandhi.

Harris was elected as the US Senator from California two years ago, during which she had made a national presence for her taking a tough stand against President Trump and his policies.

Harris, who is also the first black Senator from California, is the fourth Democratic woman leader to enter the presidential race.