Kamala Harris, the presumptive Democratic party's vice-presidential nominee, has said once elected the Joe Biden administration will create millions of jobs, fight climate change and build an affordable care act among various other strong initiatives for the welfare of Americans. Hitting hard on the three and half years of the Trump administration during her first appearance after being picked as the vice presidential nominee of the Democratic party on Tuesday, Harris, 55, presented a long list of missteps taken by the current United States government.

"As Biden-Harris Administration, we will create millions of jobs and fight climate change through a clean energy revolution, bring back critical supply chains so the future is made in America, build on the Affordable Care Act so everyone has the peace of mind that comes with health insurance, and finally offer caregivers the dignity, the respect, and the pay they deserve," she said.

During her speech along side Biden, Harris said the case of President Donald Trump and Vice President Mike Pence is open and she has worked every day to hold the officials accountable to the American people.

"Let me tell you, as somebody who has presented my fair share of arguments in court, the case against Donald Trump and Mike Pence is open and shut," said Harris.

"And the people are who Joe and I will fight for every day in the White House," she said.

During the speech she mentioned a lot of sectors where the current administration has created a complete mess.

"Just look where they've gotten us. More than 16 million out of work, millions of kids who cannot go back to school, a crisis of poverty, of homelessness afflicting black, brown, and indigenous people the most, a crisis of hunger afflicting one in five mothers, who have children that are hungry, and tragically, more than 165,000 lives that have been cut short, many with loved ones who never got the chance to say goodbye," she said.

"It didn't have to be this way. Six years ago, in fact, we had a different health crisis. It was called Ebola. And we all remember that pandemic. But you know what happened then? Barack Obama and Joe Biden did their job. Only two people in the United States died, two," Harris said.

That is what's called leadership, she told the audience.

"But compare that to the moment we find ourselves in now. When other countries are following the science, Trump pushed miracle cures he saw on Fox News. While other countries were flattening the curve, he said the virus would just, poof, go away like a miracle," she alleged.

She said it was due to the fault of the Trump administration that the US had to shut down various of its regions again while other countries were opening up.

"So when other countries open back up for business what did we do? We had to shut down again. This virus has impacted almost every country, but there's a reason it has hit America worse than any other advanced nation," she said.

Harris alleged that it is because of Trump's failure to take it seriously from the start.

"His refusal to get testing up and running, his flip-flopping on social distancing and wearing masks, his delusional belief that he knows better than the experts. All of that is reason, and the reason that an American dies of COVID-19 every 80 seconds," she said.

"It's why countless businesses have had to shut their doors for good. It's why there is complete chaos over when and how to reopen our schools.

"Mothers and fathers are confused and uncertain and angry about childcare, and the safety of their kids at school, whether they'll be in danger if they go or fall behind if they don't.

"Trump is also the reason millions of Americans are now unemployed. He inherited the longest economic expansion in history from Barack Obama and Joe Biden," she said.

Harris said that this is what happens when one elects a person who just isn't up for the job.

"Our country ends up in tatters, and so does our reputation around the world. But let's be clear.This election isn't just about defeating Donald Trump or Mike Pence. It's about building this country back better, and that's exactly what Joe and I will do," she said.

She said the Biden-Harris administration will ensure equality for the people of America.

"The civil rights struggle is nothing new to Joe. It's why he got into public service. It's why he helped reauthorise the Voting Rights Act and restore unemployment discrimination--and employment discrimination laws. And today, he takes his place in the ongoing story of America's march toward equality and justice as only--as the only, as the only who has served alongside the first black president and has chosen the first black woman as his running mate," Harris said. 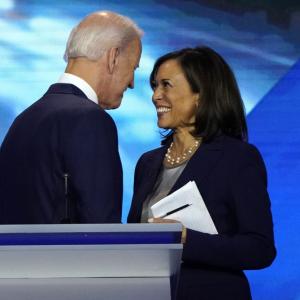