United States Vice President Kamala Harris and House Speaker Nancy Pelosi have made history as they shared the stage during US President Joe Biden's first joint session to Congress, marking the first time that two women sat behind a US president during an address to Congress. 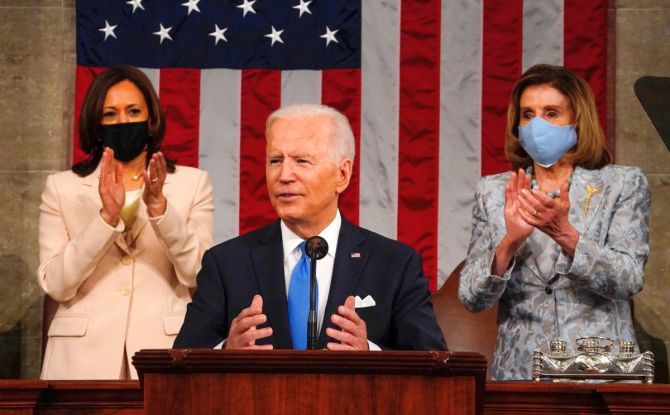 IMAGE: US President Joe Biden addresses a joint session of Congress as US Vice President Kamala Harris and Speaker of the United States House of Representatives Nancy Pelosi applaud at the US Capitol in Washington. Photograph: Melina Mara/Pool/Reuters

Harris, 56, who is also the first Indian-American and also the first Black woman to become America's Vice President, sat behind on the president's right side as he delivered his first speech to a joint session of Congress on Wednesday night.

Pelosi, 81, who became the first woman in her role in 2007, sat behind on the President's left.

Harris entered the House chamber on Wednesday night to a round of applause for Biden's address to Congress.

When asked about the significance of two women sitting behind the President for the address, Harris replied, "Normal," to reporters in the Capitol as she led the Senate delegation to the House chamber.

Asked her view on the historic moment, Pelosi told MSNBC on Wednesday, "It's about time."

"It's pretty exciting. And it's wonderful to make history. It's about time," Pelosi said hours before the speech. 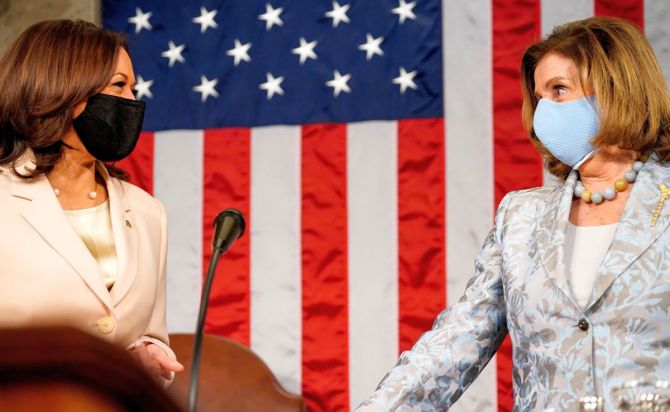 IMAGE: The symbolic seating also connotes the first time that women are first and second in the presidential line of succession, a sign of women in power in their respective roles. Photograph: Melina Mara/Pool/Reuters

Pelosi already knows what it feels like to sit on the rostrum in the House chamber and introduce a president for speeches. She has sat there for several addresses by presidents George W Bush, Barack Obama and Donald Trump.

In his opening remarks, Biden paid tribute to the historic nature of his vice president, the first woman to serve in that role in American history.

"Thank you all -- Madam Speaker, Madame Vice President," the US president said. "From this podium, no president's ever said those words -- and it's about time."

"For the first time in American history, behind the President when he speaks, will be two women: a woman vice president, and a woman speaker of the House. Presidents have been addressing Congress since George Washington did it," White House chief of staff Ron Klain said during a conversation with Georgetown University's Institute of Politics and Public Service.

"It wasn't until 14 years ago that the first time one of those seats was filled by a woman. So it took a long time to get to that milestone. Fourteen years later, for the first time, there'll be two women behind the President."

The symbolic seating also connotes the first time that women are first and second in the presidential line of succession, a sign of women in power in their respective roles, CNN said.