United States Vice President-elect Kamala Harris has named her Chief of Staff, Domestic Policy Advisor and National Security Advisor -- an all-women team -- which she said has the experience to hit the ground from day one. 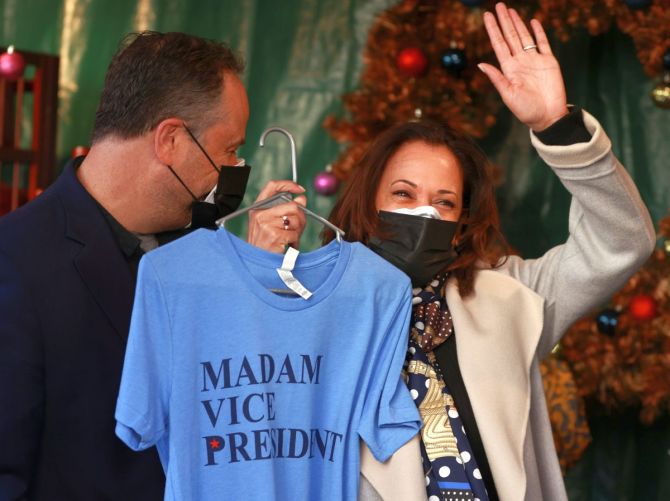 IMAGE: US Vice President-elect Kamala Harris waves as she holds a T-shirt alongside her husband Doug Emhoff during a visit the Downtown Holiday Market in Washington. Photograph: Hannah Mckay/Reuters

“Leading my office as Chief of Staff will be Tina Flournoy, whose deep experience, public policy expertise, and accomplished career in public service make her uniquely qualified for this important position,” Harris said on Thursday.

Tina brings a strong commitment to serving the American people and her leadership will be critical as we work to overcome the unprecedented challenges facing our nation, she said.

“Serving as my National Security Advisor will be Ambassador Nancy McEldowney, whose distinguished foreign service career and leadership abroad will be invaluable as we keep the American people safe and advance our country's interests around the world,” Harris announced.

Domestic Policy Advisor will be Rohini Kosoglu, she said.

She is not only an expert on some of the most important issues facing the American people, but also one of my closest and most trusted aides from the Senate and presidential campaign, said the US vice president-elect.

“Together with the rest of my team, today's appointees will work to get this virus (COVID-19) under control, open our economy responsibly and make sure it lifts up all Americans, and restore and advance our country's leadership around the world,” Harris said.

Flournoy currently serves as the Chief of Staff to former president Bill Clinton. Prior to joining Clinton's team, Flournoy was Assistant to the President for Public Policy at the American Federation of Teachers, an international union representing over 1.6 million members, where she directed the work of the legislative, political, field and mobilisation, and human rights and community outreach departments.

Flournoy has held a number of positions in the Democratic Party over the past three decades, including serving as the head of Governor Howard Dean's Democratic National Committee transition team; traveling chief of staff to 2000 Democratic vice presidential nominee, senator Joseph Lieberman; Finance Director for the Gore 2000 Presidential Campaign; Deputy to the Campaign Manager in the 1992 Clinton-Gore Presidential Transition Office; and, in the White House Office of Presidential Personnel during the Clinton-Gore administration.

Before that, she was a Spring 2020 resident fellow at the Institute of Politics at the Kennedy School of Government at Harvard University.

Kosoglu has a dedicated career in public service and was the first South Asian American woman to serve as Chief of Staff in the United States Senate. She served as Vice-President Elect Harris' Chief of Staff for her Senate office and later for her presidential campaign.

Before that, she was Policy Director for US senator Michael Bennet of Colorado, where she oversaw economic, health care and budget issues. She has negotiated several bipartisan bills into law and served as a senior health care advisor during the drafting and passage of the Affordable Care Act.

She also previously served as a legislative aide to US senator Debbie Stabenow of Michigan. Originally from New Jersey, Kosoglu is a graduate of the University of Michigan and George Washington University and is a mother to three young children.

McEldowney served for over 30 years in the US Foreign Service, including as US Ambassador to Bulgaria and as Charge d'Affaires and Deputy Chief of Mission in Turkey and Azerbaijan.

During her time at the Department of State, she served as Director of the Foreign Service Institute, where she led the foreign affairs training facility for the US government, and also served as Interim President and Senior Vice President of the National Defense University.

Earlier in her career, she was a leading policy advisor on Europe, including working for President Clinton as Director of European Affairs on the National Security Council staff, and as Principal Deputy Assistant Secretary of State in the Bureau of European and Eurasian Affairs, where she led the US government's engagement with NATO, the European Union, and the Organisation for Security and Co-operation in Europe. 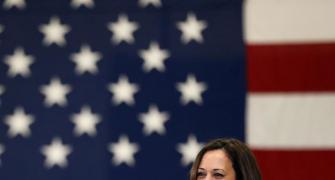 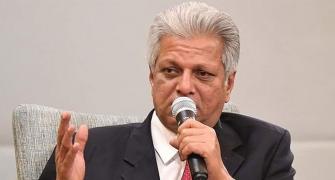 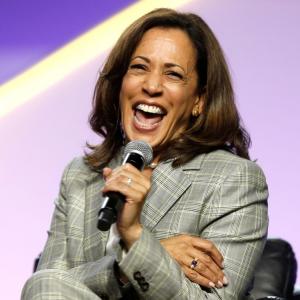