'The administration was not ready for (my) release, but I have been released because of the prayers of people.' 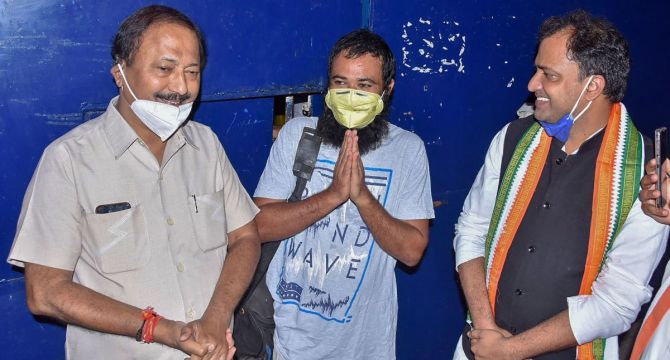 The Uttar Pradesh government was indulging in Baal Hatth' or childlike-stubbornness instead of observing 'Raj Dharma' and could frame him in another case, Dr Kafeel Khan said after being released from Mathura jail late on Tuesday night.

Dr Khan has been in jail since January after he delivered a speech at the Aligarh Muslim University during the anti-Citizenship (Amendment) Act protests in December.

On Tuesday, the Allahabad high court quashed his detention under the stringent National Security Act and ordered the Uttar Pradesh government to release him 'forthwith', saying his speech at AMU didn't promote hatred or violence and called for national integrity.

Speaking after his release, Dr Khan said, "I will always remain thankful to all my well-wishers who raised their voice for my release. The administration was not ready for (my) release, but I have been released because of the prayers of people."

"In the Ramayana, Maharshi Valmiki had said that the 'raja' should act for 'Raj Dharma'. In UP, the 'raja' is not doing 'Raj Dharma', but is doing 'Baal Hatth' (being stubborn like a child),' the paediatrician said.

Dr Khan, who first hit the headlines in 2017 following his suspension from Gorakhpur's BRD Medical College after several children died there due to the lack of oxygen cylinders, said he was apprehensive that the government may frame him in another case.

He stated that he and his family have had to face many hardships as the state government was "after" him because of the oxygen issue at the BRD Medical College.

He said he now wants to help flood-affected people in Bihar and Assam.

The Allahabad high court said the Aligarh district magistrate, who passed the order for Khan's detention, did a 'selective reading' of Dr Khan's speech, 'ignoring its true intent'.

Quashing Dr Khan's detention order, the court said, 'A complete reading of the speech prima facie does not disclose any effort to promote hatred or violence. It also no where threatens peace and tranquility of the city of Aligarh. The address gives a call for national integrity and unity among the citizens. The speech also deprecates any kind of violence.'

'A writ in the nature of habeas corpus is hereby issued to release Dr Kafeel Khan, the detenue, from state custody forthwith,' the judges stated.

Dr Khan was charged under the NSA on February 13. The Uttar Pradesh government extended his detention under the stringent law by three months twice -- in May and August.

Samajwadi Party President Akhilesh Yadav lauded the court order and hoped party leader Azam Khan, who has been 'framed in false cases', would also get justice.

'All justice lovers have welcomed the high court's order for the release of Dr Kafeel Khan from detention. We hope Azam Khan, framed in false cases, will also get justice. Injustice and atrocities of those in power do not last long,' Yadav said in a tweet in Hindi.

Azam Khan is in jail in connection with a number of cases including that of land grabbing filed against him in Rampur.

Congress leader Priyanka Gandhi Vadra also hailed the court order. She congratulated all 'justice-loving people' and party workers in the state who had been making efforts for Dr Khan's release

Dr Hamza Malik, president of the association, described DR Khan's release as a 'victory of justice'.

Dr Khan had always stood for humanitarian values as a doctor, maintained the high traditions of the medical profession and never indulged in divisive activities, Dr Malik said on Wednesday.

Instead of incarcerating Dr Khan, the government should have availed his services at a time when health amenities in the state 'badly needed' cooperation from the medical fraternity, Dr Malik added.

Dr Khan was initially hailed as a saviour for the children at the BRD Medical College for arranging emergency oxygen cylinders. However, later, he faced action along with nine other doctors and staff members of the hospital, all of whom were released on bail.

A state government probe cleared Dr Khan of all major charges, prompting him to seek an apology from the Yogi Adityanath government. He had alleged that an institutional failure had led to the deaths of the children.