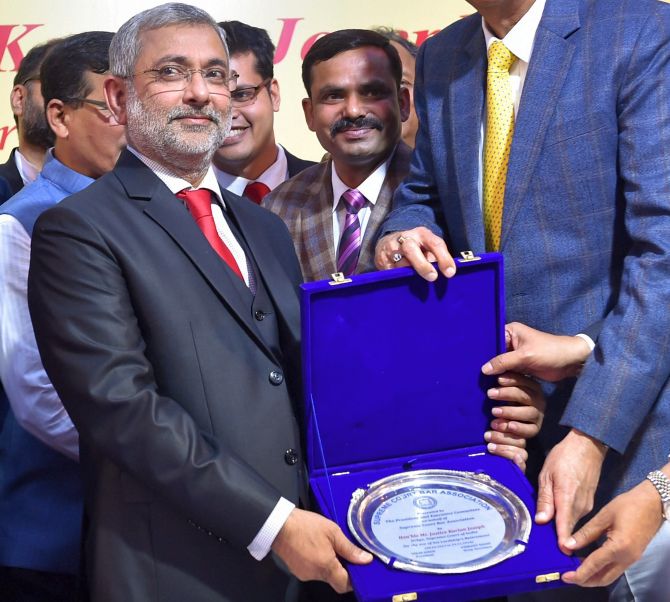 His views was shared by former solicitor general Mohan Parasaran who, while terming the allegations of Justice Joseph as serious, said the retired judge should also come out with the basis on which he had made such statements after his retirement.

Joseph, who retired on November 29, on Monday dropped a bombshell claiming that Justice Misra was "remote-controlled by an external source" and that impacted the administration of justice.

Reacting to the explosive accusation, a former CJI on condition of anonymity said, "I would not like to comment and it would also be not appropriate for me to comment. Ask the person who had made those comments and against whom the comments were made".

He added that statements have been made against an individual and he could be the best person to give his point of view.

Parasaran said the views of Justice Joseph were personal as he was inside the Supreme Court and therefore, it is very difficult for outsiders like us to comment on the issue.

"He has to come out with evidence. I am not concerned about x,y or z. I am concerned about the institution. I have great respect for Justice Joseph. As the thing is over, the Chief Justice (Justice Ranjan Gogoi) knows what to do, he is a disciplinarian and will take a corrective action," Parasaran said.

On being asked if there should be an enquiry on the allegations of Justice Kurian, he said who is going to conduct the enquiry as it is an institutional thing.

"It is a case of washing dirty linen in the public. Who is going to do that," he said.

The former CJI said the statements made by the individual do not mean that entire institution has crumbled.

"It is not like entire institution has come under clout. This institution had very eminent and independent judges who had stood up to any pressure. Those judges would never cow down to any kind of pressure to anybody. I have faith in this institution," he said.

"When it comes to testing times, judges stand up or withstand the pressure. Its not like that. There may be some aberrations within the system but saying like entire system has collapsed or crumbled is not correct", he said.

When asked whether the episode has brought disrepute to the judiciary, the former CJI said, "It has nothing to do with the institution. He (Justice Kurian Joseph) is not telling that institution has crumbled".

He said that Justice Joseph talked about one individual (former CJI Dipak Misra) and the appropriate comment can be given by the concerned individual only.

"It is Justice Kurian, the other three judges or ex-CJI Misra, who can educate the people in the country as what exactly happened and what were the implications. I would not like to comment on this issue," he said.

The ex-CJI said that he has not said anything nor he will like to say anything on the issue.

"Now the debate is going on. Let it happen. One day or other the things come out in the open", he said and added that it was for Justice Joseph to tell about who was the remote control or to whom he was referring to.

"You should ask him about which remote control he is talking about. It's journalists work to cross examine anybody", he said.

"Listen, I don't want to get into this thing. I just want to keep away from this controversy. I have turned my back. I am happy in my own little world," he added.

On the question that as a former Chief Justice of India has he ever heard of any such remote control thing.

On the question that under his tenure, did he ever hear of such influence being exercised, the former CJI said, "It's not about my tenure. Nobody said that it was under my tenure. He referred to Justice Misra's time, You cannot dig the history from 1948 and say it did not happen under so and so tenure. He has pointed out to justice Misra. You should ask him. If he will talk about my tenure, then I will give statement on this".

The former solicitor general said that Justice Jospeh was "part and parcel" of the institution and it was not clear what he meant by "remote control".

"He will come out more clearly as to what are external sources he was taking about and that would be beneficial for the institution" the senior lawyer said.

Terming it as very serious charge, the senior lawyer said that nothing of this sort was heard previously.