The Jadavpur university incident on Thursday when Union Minister Babul Supriyo was heckled and later freed by Governor Jagdeep Dhankar from hold up put by a section of students, on Friday triggered a new round of face-off between the warring Bharatiya Janata Party and the Trinamool Congress. 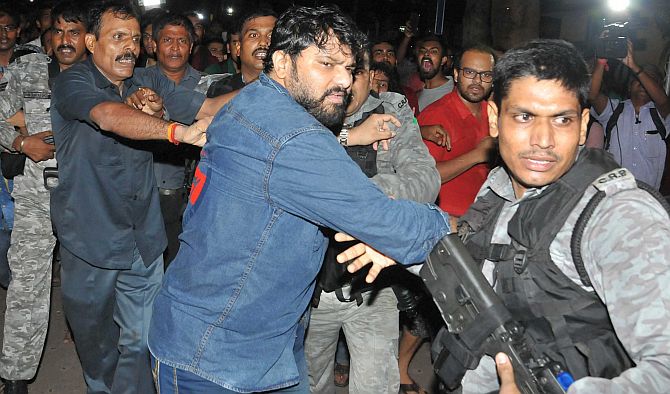 IMAGE: CRPF personnel try to rescue Union Minister Babul Supriyo being as he hackled by the left-wing students of Jadavpur University during ABVP seminar at the university campus. Photograph: PTI Photo

The BJP locked in an intense rivalry with the TMC since general election vented ire against the state government over the episode, whereas the ruling party directed its criticism at the Governor for rushing to the University which it said is expected to provide justice to the university's vice-chancellor, professors, students, who were beaten up during and the after the minister's visit there.

Chief Minister Mamata Banerjee, who retured on Friday after a three-day trip to Delhi, where she had met Prime Minister Narendra Modi and also Union minister Amit Shah, did not speak anything on the JU incident.

Governor Dhankar justified his visit to the university to rescue the union minister, saying he waited for "sufficient time" after speaking to the chief minister and left for the institute after "the situation did not show any change".

On TMC secretary general's claim made in a statement that he visited the varsity without informing the government and accusing the governor of adopting a "partisan approach" in blaming the West Bengal government for the ruckus, Dhankar termed the statement as "unfortunate".

Dhankar, who is also the chancellor of the university, said,"Obviously he (Chatterjee) did not know of the developments between the governor and the DGP/CS as also the conversation with the CM. The (TMC's) stand in the release is factually incorrect," he said.

He expressed relief that his visit to the institute brought an end to the "unwholesome situation",a Raj Bhawan statement said.

A day after the incident, Supriyo, Union minister of state for Environment, Forest and Climate Change, described his attackers as "cowards and hooligans" who would be found soon, but would not be dealt in a similar manner rather "rehabilitated mentally".

Zeroing in on a picture of a student pulling him by his hair, Supriyo in a tweet, wondered what action would the Mamata Banerjee government take against the student for assaulting him without any provocation.

"This is the guy who led the assault in #JadavpurUniversity... we will find him out and then see what @MamataOfficial does to him in terms of charging him for assault without ANY PROVOCATION whatsoever from our/my side," he tweeted.

State BJP president Dilip Ghosh alleged that the Jadavpur University campus has become a hub of anti-nationals and communists and said "our cadres" would conduct a Balakot-like surgical strike to destroy it.

The protest against the minister was held by workers of Leftist unions of the university and some members of the TMC when Supriyo had gone to address a seminar organised by the Akhil Bharatiya Vidyarthi Parishad, affiliated to the Rashtriya Swayamsevak Sangh. 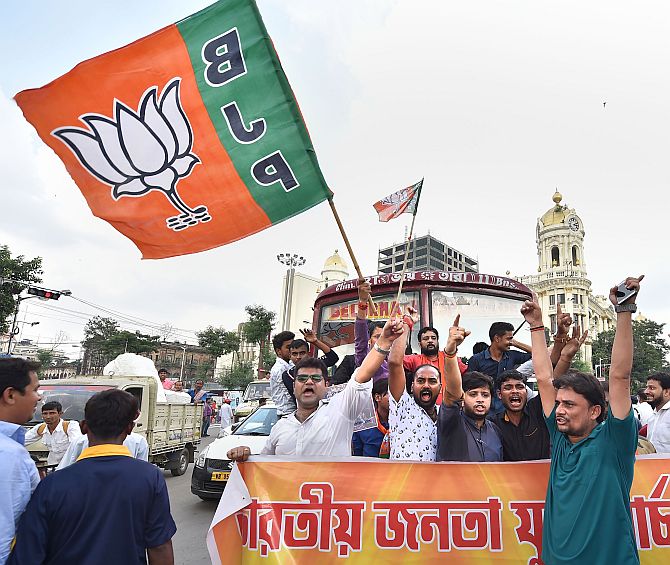 IMAGE: BJP supporters raise slogans as they block roads during a protest rally against the assault on party leader Babul Supriyo at Jadavpur University, near Esplanade area in Kolkata. Photograph: Swapan Mahapatra/PTI Photo

Accusing the TMC government of sitting idle till the minister got killed in the institute,Ghosh said he would write to Union Home Minister Amit Shah describing the incident.

"The Jadavpur University campus is a hub of anti-national and communist activities. This is not the first time that such an incident has happened there. Just like our security forces conducted surgical strike to destroy terror camps in Pakistan, our cadres would also carry out out the same type of surgical strike to destroy anti-national hubs in JU campus," Ghosh said while addressing a press conference.

Ghosh supported the governor for rushing to the university campus to save Supriyo from the mob inside the JU campus.

He also demanded immediate resignation of Jadavpur University Vice Chacellor Suranjan Das for failing to control the situation inside the campus.

TMC leader and minister Partha Chatterjee said the state government will punish those who assaulted the students of Jadavpur University and ransacked the campus on Thursday.

He also said Governor's visit to the campus is expected to provide justice to the university's vice-chancellor, professors, students who were beaten up during and the after the minister's visit there.

Thouth the minister did not mention any name, workers of the ABVP, who had held a seminar in the campus which sparked off the unrest at the university, allegedly vandalised the room of the Arts Faculty Students Union.

The Jadavpur University Teachers Association condemned the way a union minister talked to the vice-chancellor during Thursday agitation by students and alleged his behaviour insulted the entire fraternity of JU.

Media reports said that the minister talked harshly to the VC for not receiving him and calling police when agitators were roughing him up.

The JUTA, largest teachers' body of the institute,in a statement also said the agitating students should not have been "provoked" by some of the objectionable comments and gestures of the minister.

The association also said the university teachers were deeply hurt by the Governor's role.

A group of 15 prominent personalities, including film director Aparna Sen, expressed concern over minister's behaviour with the VC and the conduct of Supriyo's security personnel with the students.