Jodhpur cop kneels on man to control him; slammed for approach

A Jodhpur policeman kneeled on a man in an attempt to subdue him after he turned aggressive and refused to pay a fine for not wearing a mask in public, reigniting memories of a similar incident in the United States in which an African-American died.

George Floyd, a Houston resident, died after he was pinned to the ground by a white police officer who kneeled on his neck as he gasped for breath. His death on May 25 has triggered a widespread violent protest in the United States and sparked a debate on systemic racism.

But Jodhpur police said the man, identified as Mukesh Kumar, 40, snatched the mobile phone of a policeman and assaulted two constables who confronted him for not wearing a mask in public. Kumar also tried to run away without paying the fine, they said.

Still, many Internet users slammed the police approach after a video of the incident went viral on social media.

"@PoliceRajasthan world is protesing over a similar act by police in US. There is something very wrong with police's system (sic)," Hena Fatima said on Twitter.

The video showed Kumar aggressively resisting the policemen and engaging in a fistfight. It also showed a constable kneeling on him for a few seconds and trying to take back his phone.

Police have arrested Kumar but are yet to take action against the constable, terming his action "unintentional and spontaneous".

"We arrested him and sent him to the judicial custody," said ACP Neeraj Sharma.

Sharma said Kumar was booked in another case last June for allegedly piercing an eye of his father with a screwdriver. A charge sheet has been filed in the court in that case.

Describing the incident, the ACP said two constables spotted Kumar without a mask at Pahla Pulia on Thursday evening. They warned him for not wearing a mask and asked him to pay the fine, which infuriated him and he began misbehaving and threatening the policemen.

Sharma said Kumar was hostile and not cooperating with the policemen. When the constables tried to confront Kumar, he fell down and it was "an spontaneous turn of things". 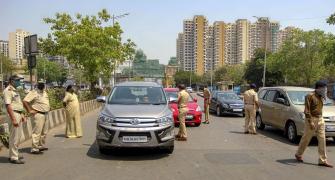 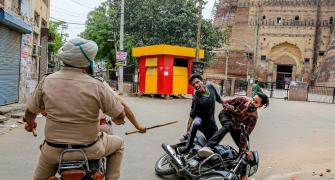 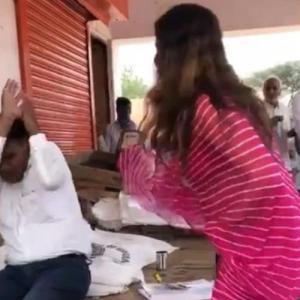