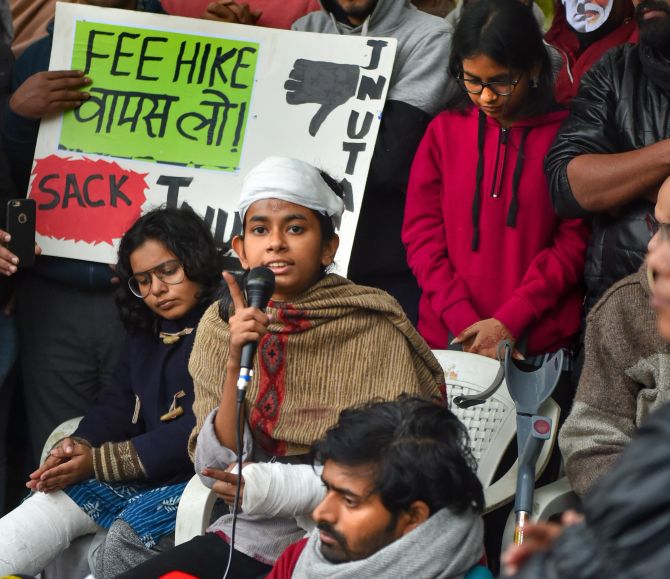 A team of Delhi Police's Crime Branch visited the Jawaharlal Nehru University on Monday and questioned three students, including JNU Students' Union president Aishe Ghosh, in connection with the January 5 violence on the campus, officials said.

They said the three students, Pankaj Mishra, Vasker Vijay Mech and Ghosh, were questioned by the crime branch officers.

They said that three other students -- Akshat Awasthi, Rohit Shah and Komal Sharma -- were absconding. Awasthi and Shah, who are first-year students of JNU, had featured in a sting operation conducted by a TV news channel.

The police had identified Sharma, a student of Daulat Ram College, as the masked woman who was purportedly seen in the videos of violence shared on social media wearing a check shirt, a light blue scarf and was carrying a stick.

Her phone was switched off since Saturday night. When police had contacted Awasthi and Shah, they said they will join the probe but their phones were later switched off.

All the three have been sent notices to join the probe.

Meanwhile, a delegation of teachers of the JNU knocked the doors of the Human Resources Development (HRD) ministry again claiming that the situation is not conducive for conducting academic activities and that students are scared of returning to the campus.

As the JNUSU continued to boycott the registration for the winter semester demanding a complete roll back of the hostel fee hike, the university administration claimed that of the nearly 8,500 students more than 5,000 have registered.

In a statement, HRD Minister Ramesh Pokhriyal said the fee-related matter has been sorted out and that the continuation of the agitation by students was not justified.

As decided during consultations with students, he said, the utility and service charge is not being levied on them and will be borne by the University Grants Commission (UGC).

The students have stuck to their demand for a complete rollback of the fee hike.

"The fee-related matter of JNU has been sorted out following several rounds of discussions with representatives of university students and teachers.

"The Ministry had constituted a High-Powered Committee (HPC) to restore the normal functioning of JNU through dialogue with all stakeholders and to advise the university administration for resolution of contentious issues.

"The students are not being asked to bear the cost of service and utility charges proposed for the winter session, which was their basic demand. Therefore, the JNU fee hike issue stands resolved and continuation of agitation by the students is no longer justified," the HRD ministry statement quoted Nishank as saying.

The minister said universities should not be converted into political arenas and appealed to the students to call off their agitation.

He added that over 5,000 of JNU's nearly 8,500 students have registered for the next semester.

"Various meetings were held by HRD secretary with representatives of students, teachers and JNU administration on December 10-11, 2019, certain mutually agreeable agreements were arrived (at).

"As agreed in the meetings, the revised hostel room charges will remain applicable with 50 per cent concession for BPL students," Nishank said.

On the probe into the violence when a masked mob attacked students and teachers, the police said, Mech and Mishra were questioned for nearly an hour and all three have assured cooperation with police in the probe.

Ghosh was questioned in Teflas which houses the students' union office.

"They sought my version of events. They asked about my complaint and told me to narrate what happened on January 5. I also asked why they did not register an FIR on the complaint filed by me," Ghosh said.

"They have also taken my number and said they will interact with me on an informal basis. I told them that I have some evidence, including videos which I am currently making a list of and will submit it to them in a CD," she said.

Pankaj Mishra, a MPhil student of School of Social Sciences, said he has submitted a six-page written statement to the police about his whereabouts.

"I was asked where I hail from and what was I doing before joining JNU and where did I work," he said.

Mishra was also asked about his whereabouts on January 3,4 and 5 when the violence unfolded.

"They tried to make me comfortable. I told them that I am a common student and don't belong to either the left or the right. In my statement, I mentioned my whereabouts, how I landed in JNU and since when I have been studying here... I have appealed to Delhi Police for a fair probe and hope that a peaceful ambience is restored in the campus so that we can get back to our studies," he said.

Mishra, Mech and Ghosh are among the nine suspects whose pictures were recently released by the police following the violence in which 35 students, including Ghosh, were injured.

Hitting out at the left-leaning student organisation and the Congress' National Students' Union of India, the ABVP at a press conference alleged that they were hand-in-glove in the January 5 violence. They also said the attack was the fallout of a pre-planned conspiracy by rival unions.

The ABVP also released eight videos in support of their claims and demanded a detailed investigation.

The classes for winter semester in the varsity were scheduled to start on Monday.

However, both students and teachers boycotted the classes amid stand-off between the administration over the fee-hike issue. They also remained firm on their demand to sack Vice-Chancellor M Jagadesh Kumar.

The JNU administration had also issued an advisory to teachers to resume their classes in the interest of students. However, the teachers refused to heed the advice.

At a meeting with the HRD ministry officials, a five-member delegation of JNU Teachers Association (JNUTA) said the atmosphere was not conducive to conduct academic activities and claimed students are scared of coming back to campus.

"We do not feel secure on campus, atmosphere not conducive for academic activities. Students who left campus after violence scared to return, how can we resume teaching," JNUTA President D K Lobiyal told the ministry officials.

Prashant Kumar, a PhD student at the varsity, said the masters and graduate course students have decided to boycott classes.

"The vice-chancellor has written to various centres to frame the time-table but there has been no development. The classes did not start today but might begin in a day or two," Kumar said.

A student from the School of Social Sciences, who did not wish to be named, said, "We first want the issues to be sorted, only then can we focus on our studies. Just to make a fresh beginning, we cannot forget the past".

According to Professor Hari Ram Mishra of the School of Sanskrit and Indic Studies, some students attended classes but many of them are still not back in campus.

"The classes should commence in a proper way in the next couple of days," he said.