JLF Diary: And just like that, Rushdie was banished again 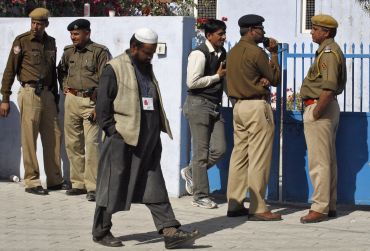 In his diary of the concluding day of a rather over-eventful Jaipur Literature Festival 2012, rediff.com's Abhishek Mande tries to communicate the plethora of emotions, ranging from rebellious to disbelief, that coloured the prestigious, and increasingly significant, five-day literary meet.

Zembla, Zenda, Xanadu:
All our dream-worlds may come true.
Fairy lands are fearsome too.
As I wander far from view
Read, and bring me home to you.

Haroun and the Sea of Stories begins with this dedication. It appears with the first letters of each sentence in bold highlighting the name of the person the book is dedicated to: Zafar, Salman Rushdie's son, from who the author was separated from the time he went underground after Ayatollah Khomeini of Iran imposed a fatwa calling for his death after the release of his book The Satanic Verses.

Each time I read this dedication, I cannot help but notice a tone of sadness and pathos in it. I also cannot avoid noting the fact that it does end on a note of hope -- 'Read', it says, 'and bring me home to you'.

The Jaipur Literature Festival 2012 was one such occasion that would have given an opportunity for Rushdie to come to, what I suspect, he still considers home.

And yet, a series of events that preceded the announcement at about 3.45 pm, the author was not only disallowed to step on the Indian soil, he was also banned from speaking via a video link.

A little over a few weeks ago, there was much excitement amongst those looking forward to the latest edition of the Jaipur Literature Festival when the name of Salman Rushdie appeared in the list of speakers.

Sooner rather than later, folks from Darul Uloom Deoband objected to the visit. Before anyone could figure what happened, the mole became a mountain. Allegations started flying thick and fast and Rushdie's visit came under a cloud.

In the days leading to the festival, the only thing that seemed to matter to anyone was whether Salman Rushdie would make it or not.

The author was to address a session on the first day of the festival. Till late into the previous night there was no news of where he was. Then, the next morning, as the festival opened with much hope and under great security, mediapersons were told that Salman Rushdie would not be able to attend the festival.

The initial disappointment gave way to a strange feeling of relief too, because the announcement did in a way offer a sense of closure.

Then there was outrage. And in the days to come it would spill over in ways that none of us standing on the media terrace on that crisp winter morning of January, as Sanjoy Roy read out Rushdie's statement, would know.

Within hours, some authors decided that the best way to protest against Rushdie's absence was to read out from The Satanic Verses, the book that has been banned in India for hurting sentiments of people from the Muslim community.

Amitava Kumar and Hari Kunzru were the first. At a little past 5.15 pm, Kumar and Kunzru did the unthinkable.

The next session featured Jeet Thayil and Ruchir Joshi. It was a fairly ordinary session -- two authors reading out from their books and taking questions. On any other day such a session would have ended without much noise. In fact by the time it was drawing to a close many from the audience had already left the venue.

When there were no more questions to ask, Thayil pulled his chair close to Joshi and the two began reading out a passage from a paper -- just like that and without any real context.

At first no one seemed to know what was being read out. Then as familiar names began tumbling out some in the audience realised just what was happening. Finally when the reading ended, Joshi announced that the passage was from The Satanic Verses and one that he had downloaded off the Internet. If that wasn't enough, he gallantly told the audience that everyone should follow suit and read the passages from the banned book in public and 'Break the law!'

When the media thrust their cameras before him, Joshi attempted to make a statement before he was whisked away by a horrified Sanjoy Roy, the producer of the festival.

A heated exchange followed as Namita Gokhale, the festival's co-director, pulled up Joshi and Thayil for what they did.

The latter simply sat while Joshi tried to defend his stand.

Later that day, I ran into one of the four authors who read out the passages. I introduced myself and told him that I was hoping he could read out a passage from his book for us on camera.

When I assured him that I was not interested in the Satanic Verses controversy, the author, who has since then insisted that I don't take his name, raised his eyebrows, looked at me like I had just told him there was a ghost in the room, and said, "What Satanic Verses?!?!"

Perhaps the really sad part about the Jaipur Literature Festival 2012 was that it was so overshadowed by Salman Rushdie that there seemed little else that mattered.

Every day, every session, every author saw at least one question about Salman Rushdie being thrown her/his way.

If it wasn't Rushdie, the matter of whether the authors had been right in reading out banned passages and if it was correct on the part of the organisers to pack them off the very next morning, would come up repeatedly.

Sooner rather than later, the whole issue had been reduced to something of a joke. By the end of it, no one, including Chetan Bhagat, wanted to talk about it.

And yet it was there, like an elephant in the room. Sure everyone was talking about it but no one seemed to be doing anything.

Then Nilanjana Roy, a journalist and literary critic, started a petition to unban The Satanic Verses. It was, she told me, long overdue. She pointed out that there was a need to review the ban that was imposed almost 23 years ago. Roy said she hoped to take the petition to the Prime Minister and the Home Minister.

By this time, everyone had practically given in to the fact that there would be no Rushdie at the festival. Sure there had been talks of a video link but that seemed bleak too.

Then suddenly the noises grew stronger. Rushdie, it seemed, would indeed speak to the audiences at the Jaipur Literature Festival via video link.

There was hope again. The liberals raised a toast to free speech and technology, journalists got something to report again -- one that would appeal to the masses and not just the educated elite who were present at the festival and the organisers were happy that they had got their crown jewel back!

The fourth day did end on a note of hope and joy and the fifth began on a similar one. Salman Rushdie would speak via a video link. The Skype option was explored and dismissed but he would be addressing the festival audiences from a studio that had been booked by NDTV 'somewhere in Europe' as Roy told us.

For at least an hour or so it seemed like people would finally stop talking about Rushdie.

However, there was one last act in the drama that was yet to unfold.

By the end of the second session of the day -- it was noon by then -- the police presence had gone up drastically and members of Muslim organisations wearing skull caps and roaming about with a sense of purpose had gone up too.

Suddenly the atmosphere changed. A feeling of unease and anticipation crept in and talks of the session being cancelled began doing the rounds all over again.

I spoke to a few who had come down to stage a protest. One of them, eating a kachori, told me that they would do whatever they could to stop the session.

Another, wearing a jacket that read 'God Tussi Great Ho' told me he would do the same too.

The organisers too seemed wary now. When I asked one of the PRs if it was happening at all, she looked at me, sighed and said, "I don't know!" The emotional see-saw was getting out of hand.

Then as minutes ticked by, people gathered at the venue where the Rushdie conference would be held. Barkha Dutt, we were told, would be in conversation with the author.

The moment everyone was waiting for had finally arrived.

The pandal was full, not perhaps as full as when it was

"It all boils down to this!" someone said half-jokingly.

And indeed it did.

For many of us Rushdie even via video link was just as good as Rushdie in person. We were prepared to accept the bargain and carry on with our lives. It was alright as long as we were even getting to hear him speak.

Then it happened. Ram Pratap Singh -- the man who owns the hotel -- came up on stage and uttered the words everyone knew were coming but were unwilling to accept.

And just like that, Rushdie was banished yet again.

I can't say I have known Singh very well but we have chatted on many occasions. The man I saw on the stage that evening was not the one I'd met so many times. Singh and his wife Jyotika, always smiling, have been as indelible fixtures at the festival as William Dalrymple, Namita Gokhale and Sanjoy Roy.

As he read out a written statement, Singh wasn't happy. He talked about the property that had been home to him and his family and confessed that he feared for their lives if the session went ahead.

Sanjoy Roy voiced his displeasure too, chocking somewhat at the end. As he, Dalrymple and Gokhale walked off the stage the audience looked on.

There was in a way a sense of disbelief. As I looked around to the audience I noticed that very few had actually left their seats. They continued to sit as if waiting for someone to say that it was an early April Fools joke. Or that by some strange miracle, the giant LED would flicker to life again, and there on the other end would be a bearded and balding if somewhat chubby man in glasses and a cheeky smile.

"Hello!" he would probably say.

And then we would all erupt in a joyous cry and celebrate just as the Guppees did when Haroun and his friends defeated Khattam-Shud, the 'Prince of Silence and the Foe of Speech'.

Yes that's what we'd do.

But the LED never came on and the bearded and balding if somewhat chubby man in glasses and a cheeky smile never appeared. There were no celebrations, no joyous cries of victory. Khattam-Shud lived on.

Image: A member of a Muslim group walks past police officers outside the venue of a meeting between the Jaipur Literature Festival organisers and various members of Muslim organisations before a video-link speech by Salman Rushdie was cancelled, on Tuesday 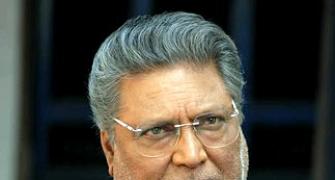 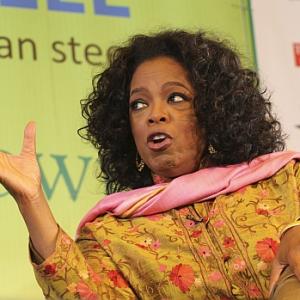 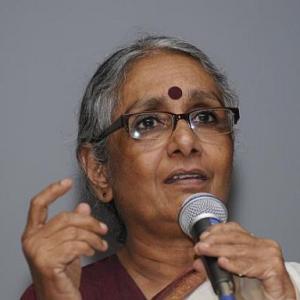