Denying reports that Jharkhand had slackened anti-Maoist operations, state police chief on Friday said that they will launch a major operation against the ultras within the next couple of days.

"We have completed 70 per cent to 75 per cent of preparations for a big operation against Naxalites which we will launch in a couple of days," state Director General of Police Neyaz Ahmed told a joint news conference with state Home Secretary J B Tubid.

He said the state was on the path of a 'well made-out plan.'

"Our policies to tackle Maoists over the last one year has been the same. There been no slackness in operations," he added.

On Chief Minister Shibu Soren's offer for dialogue with the Maoists, Tubid said, "It does not mean nor can it be interpreted that the state government has slackened its Naxal policy ... It is a multi-dimensional strategy where development work is a part of it."

Asked to comment on 'Operation Green Hunt', Tubid said, "You (media) have given such a name (Green Hunt) not us."

"The anti-Maoist operation did not mean picking up guns and venturing into the forests. There are many dimensions to the operation and the government is working on all of them," he added.

On the question why the state was not represented in the Raipur meeting where Union Home Minister P Chidambaram reviewed with the chief ministers of Orissa, Chhatisgarh and Maharashtra the progress of the on-going operation against the Maoists in the Naxal-hit states, Tubid said the Centre was fully cooperating with Jharkhand.

The DGP said operations against the Naxalites were on at different levels and the security forces continued to be deployed where they were.

Citing assembly elections for the delay in preparations for launching the anti-Maoist operation, Ahmed said the police are reviewing the situation on a day-to-day basis.

Describing the Naxal problem as 'multi-dimensional,' Tubid said there was a committee headed by the chief secretary which was monitoring the developmental projects.

"Ten out of 33 affected districts in the country have been chosen in Jharkhand as part of developmental strategy, which is being monitored at the chief secretary's level and secretaries of all the departments are members of the committee," Tubid added.

During President's Rule in Jharkhand, a couple of Central teams, including one led by Chidambaram had visited the state and discussed development issues in the state's backward districts as a part of the multi-pronged strategy to deal with the Maoist menace. 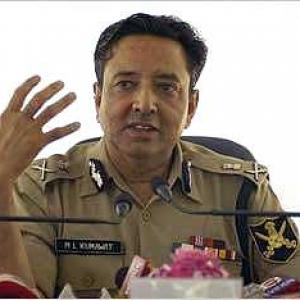 'Where will we end this cycle of violence?'