Asserting that restrictions in the Kashmir Valley were put in place to avoid loss of human lives, the foremost priority, a top government official on Tuesday said these impositions on people's movement and communications are being eased out in a phased manner. 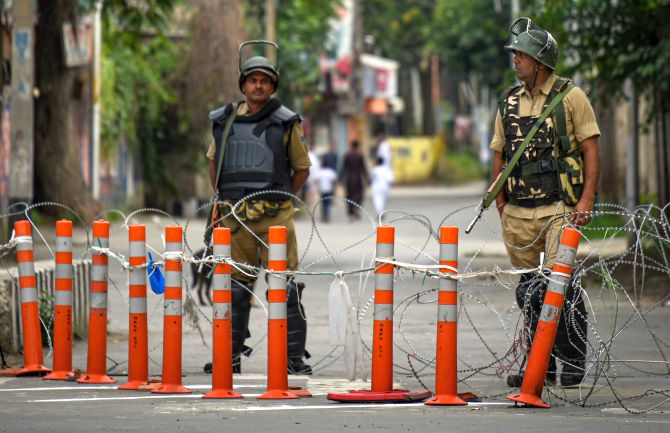 IMAGE: Security personnel stand guard during restrictions in Srinagar. Restrictions have been imposed in several districts of Jammu and Kashmir as a precautionary measure after the state lost its special status. Photograph: S Irfan/PTI Photo

The official also asserted that these restrictions will only be removed after an assessment by local authorities and added that political leaders like former chief ministers Omar Abdullah and Mehbooba Mufti, who were arrested as a "preventive measure", will also be released by the J&K administration only after assessing the ground situation.

A home ministry spokesperson said as per the J&K administration, restrictions imposed on people's movement and communication links in the Kashmir Valley are being eased out in a phased manner and the normal situation in the Jammu division has been restored after assessment by relevant local authorities.

In Srinagar, Principal Secretary in the J&K, Rohit Kansal, told a press conference that the administration was hopeful of further relaxation in the security clampdown after the dress rehearsal for the August 15 Independence Day celebrations conclude in various districts.

Kansal said prohibitory conditions were relaxed in various parts of Kashmir and the Jammu region was "almost entirely" free of restrictions.

"Restrictions, however, do continue in parts of Kashmir," he said.

Kansal said the curbs would be relaxed in parts of the Valley in a phased manner based on the assessment of local authorities.

The security clampdown was imposed last week after the Union government revoked J&K's special status given under Article 370 of the Constitution and bifurcated the state into two Union territories -- Jammu and Kashmir, and Ladakh.

The top government official said in New Delhi that this was not the first time restrictions were imposed in the Valley and a similar situation had existed in 2016, following the killing of Hizbul Mujahideen terrorist Burhan Wani after which the separatist amalgam Hurriyat Conference called 'hartals' for weeks.

"This time the state administration has taken pre-emptive steps to minimise the violence and loss of lives. This is an extra-ordinary situation," the official explained.

Steps have been taken so that there is minimum inconvenience to people, that include ease of travel to hospitals, opening of markets and distribution of food at doorsteps, the official asserted.

"The whole effort is to bring normalcy as early as possible. However, any law and order decision should be best left to the local administration," the official said.