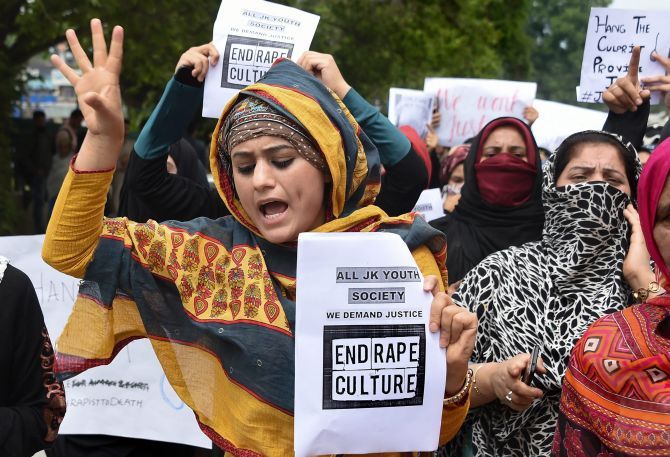 IMAGE: Protesters hold placards as they shout slogans during a protest against the alleged rape of a three-year-old girl in Bandipora district of Jammu and Kashmir, in Srinagar, on Monday. Photograph: S Irfan/PTI Photo

Over 40 security personnel, including an officer, and seven civilians were injured on Monday as clashes broke out in Jammu and Kashmir during protest against the alleged rape of a three-year-old girl in Bandipora district, police said.

An assistant commandant of the Sashastra Seema Bal (SSB) received injury on his head, the official said.

Seven civilians were also injured in the clashes, he said, adding all of them were stable.

A shutdown was also observed in Kargil town as locals took out a rally over the incident.

The protesters raised slogans in support of their demand for exemplary punishment to the accused who is in police custody, the officials said.

They said the shops and business establishments remained closed in the entire town as local residents assembled under the banner of Imam Khomeni Memorial Trust and took out a massive rally.

Students joined the rally which went round various parts in the town and concluded peacefully at Kalon Rahim Khan Chowk.

The vice chairman of the trust, Sheikh Bair Shakir, urged the government to deal with such heinous cases on fast track basis and ensure exemplary punishment to the culprits in a time bound manner.

Congress rebel leader and former MLA Asgar Ali Karbali expressed solidarity with the family of the victim and said the people of Kargil would not remain mute spectator to such gruesome incidents.

"We want our society a better place for every one especially the girls and the women. The government should ensure investigation of rape cases on fast track basis and deliver speedy justice to the victim by setting up special courts," he said.

The three-year-old girl was allegedly raped in Sumbal area of north Kashmir's Bandipora district, prompting the Jammu and Kashmir Police to constitute a special investigation team (SIT) to probe the incident. 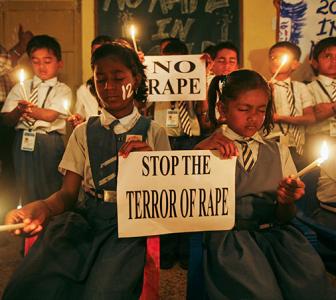