Mosque becomes beacon of hope for stranded in J-K floods 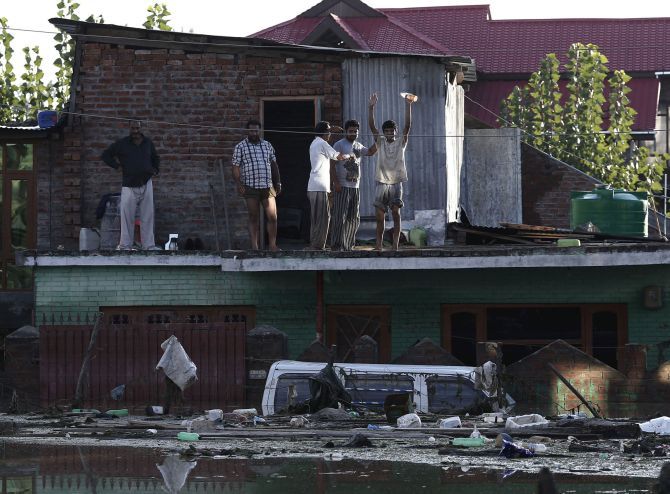 Flood victims call for help as they stand on the roof of their submerged house in flood waters in Srinagar. Photograph: Adnan Abidi/Reuters

Jama Masjid in Hyderpora area has turned into a major relief centre for those affected by the devastating floods in the Kashmir valley, housing hundreds of people, including women and children.

Significantly, in this hour of tragedy, this mosque has become a symbol of communal harmony as a number of Hindus, who had come from outside the state for work, are also taking shelter here.

The inmates of this camp at the mosque, which remained unaffected by the floods, have come from various parts of the Valley and each one had a story of horror and pain to tell.

“I, along with other three members of family, left our house on Sunday evening (August 31) when the water levels started rising fast. I arranged for a boat and first dispatched my daughter to the masjid. Then rest of us followed suit. Since then, we are staying in this masjid,” said 58-year-old Bashir Ahmed Akhoon, a government servant.

Khalida Akhtar, 60, narrated how she and six other members of her family, along with children, left their home in Tengpura in panic when water level rose on Sunday night.

“We first took shelter in a nearby hospital. But the building of the hospital also was in danger and distress calls were made to the police for help. Around midnight, the army came and rescued us. I am extremely grateful to them,” she said.

She also expressed gratitude to the masjid authorities for providing shelter to the homeless family, which includes her husband, three sons, their wives and children.

Her son Mohd Haroon said there were 2,000 people in the hospital whom the army saved that night. “Though the distress call was made to the police, the army came to our rescue. We owe our new lives to them,” he says.

Mohd Asif, a 26-year-old furniture craftsman from Tengpura, said he had gone to Magam in south Kashmir’s Anantnag to meet an aunt. When the water fury started, he rushed back, walking for three days before reaching home. “But I found my father, mother and two sisters missing. I looked around but did not find them. While I was losing hope, somebody suggested that I should look for them in Hyderpora masjid where many people have taken shelter. By God’s grace, I found them there,” he said.

At the mosque premises, a community kitchen is being run and donation of clothes is pouring in. The inmates are housed in the three-storeyed building.

Around 2,400 people eat food every day at the masjid, said Haji Ghulam Nabi Dar, president of the Hyderpora Jama Masjid Committee. Affected people from far off places like Baramulla, Kupwara and Sopore have come here for shelter, he added.

“We decided to set up the camp on Friday last when we saw the fury of floods increasing,” he said, adding the government has no role in running the camp and relief material is coming from the common people. He says people are angry at the administration as “they did nothing to help the victims”. 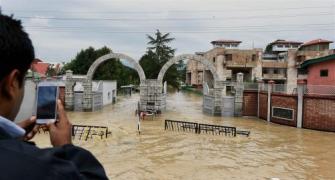 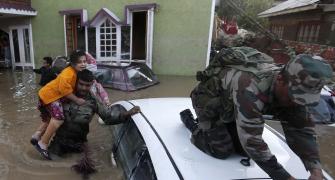 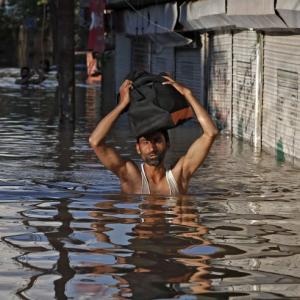 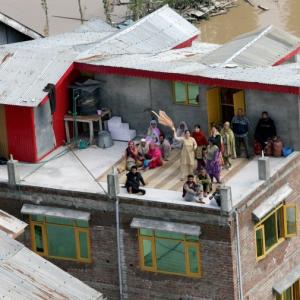