Jharkhand polls in 5 phases from Nov 30; result on Dec 23 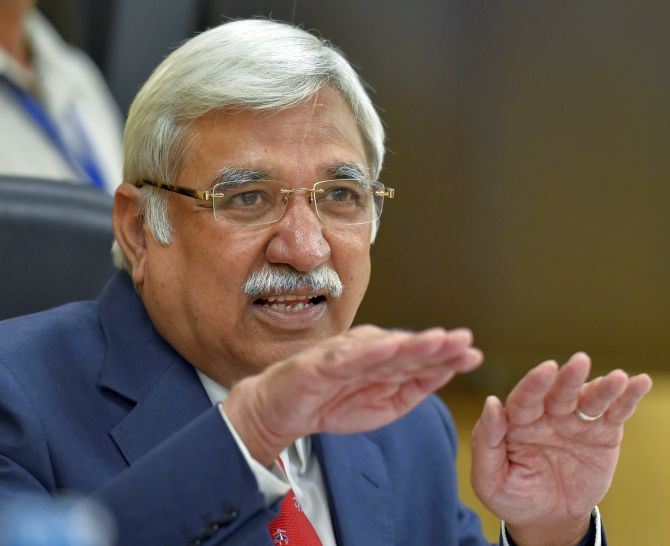 The Election Commission on Friday said assembly polls will be held in five phases between November 30 and December 20 in Jharkhand, where opposition parties, mainly the Congress and the Jharkhand Mukti Morcha, will make a determined bid to oust the Bharatiya Janata Party government headed by Raghubar Das.

The assembly polls in the Naxalism-affected state were held in five phases in 2014 and 2009 as well, he said, responding to questions on why a shorter poll schedule was not announced.

The CEC said that some of the seats are affected by Left Wing Extremism and the decision has been taken keeping it in mind.

Responding to a question on the absence of Election Commissioner Ashok Lavasa at the press conference, the CEC said the former is on an official visit to Australia and his views were taken over telephone.

"They have been (his views) recorded in the files," Arora said.

An official later said Lavasa was present when the state police chief and chief electoral officer briefed the commission in New Delhi on poll preparedness on October 22 and 23.

The BJP is in power the state, which has a large tribal population, and an alliance of opposition parties, mainly the Congress and the Jharkhand Mukti Morcha, is making a determined bid to oust the government headed by Das.

With the Jharkhand polls coming on the heels of assembly elections in Maharashtra and Haryana, its result will be keenly followed as political watchers believe that the opposition has been emboldened by the outcome in the two states where its numbers have been better than expected.

Though the BJP, which was in power in Maharashtra and Haryana, emerged as the single largest party in both states, its numbers fell short of expectation, even though the opposition was written off by the media and most pundits.

The saffron party has asserted that it has provided a stable, clean and development-oriented government in Jharkhand, with the opposition claiming that the state's progress has stalled under its rule.

Das is the first state chief minister to have completed the full term of five years in the state, long plagued by fractured mandate and unstable governments.

Asked why assembly elections in Maharashtra, Haryana, Jharkhand and Delhi were not announced together keeping in line with the pitch for simultaneous polls, he said it was up to the chief minister of a state to dissolve the assembly and not the commission.

"If the Delhi chef minister dissolves the assembly, we will announce elections, as not many security forces are required here," he said adding that the call has to be taken by the government, not EC.

He said the invite to the media specifically mentioned Jharkhand elections as a section of the media had reported that Delhi and Jharkhand polls would be announced together.

At least one control unit and one ballot unit make up for one EVM.

In a first, people with disabilities and those above 80 years of age can cast their vote using postal ballot in Jharkhand assembly polls,

As far as voters from essential services are concerned, they can vote by postal ballot starting with Delhi polls as the procedure is yet to be drawn for them, Arora said.

After the recent amendments to the Conduct of Election Rules by the Law Ministry, the commission has notified that all senior citizens above 80 years of age and people with disabilities (PwD) marked voters in the electoral rolls will have the option of voting either by postal ballot or by voting at their polling stations.

All such voters will have to apply for postal ballot within five days of notification for election in their assembly constituencies, if they wish to use the option of postal ballot, the EC said.

The commission has directed to the Jharkhand chief electoral officer to take necessary steps for the dissemination of information and facilitation to such voters.

Essential services voters are those who are left out due their due to engagements in various capacities in the discharge of essential services such as railways, state transports and aviation.