Polling in 15 constituencies of the state on Sunday ended with 61.08 per cent electorate exercising their franchise in the penultimate phase of the assembly elections in Jharkhand as the day passed off peacefully.

The polling, which began at 7 am in all the seats, ended at 3 pm in 13 constituencies while it concluded at 5 pm in Dhanbad and Bokaro, Election Commission office sources said. People take selfies of their inked fingers after casting their votes during the fourth phase of Jharkhand assembly election outside a polling station in Dhanbad on Sunday. Photograph: PTI photo

The 13 other seats which went for polling in this round were Madhupur, Deogarh (SC), Bagodar, Jamua (SC), Gandey, Giridih, Dumri, Chandankyari (SC), Sindri, Nirsa, Jharia, Tundi and Baghmara.

“61.08 per cent polling has been registered, which may go up in the final count,” Chief Electoral Officer P K Jajoria told reporters adding voting passed off peacefully.

Of the segments, Chandankyari (SC) registered the highest figure of 71.28 per cent, followed by Madhupur at 70.20, the EC sources said. Security person keeps vigil as voters wait in queue to cast their votes in the fourth phase of Jharkhand assembly elections at the naxal hit Tundi constituency. Photograph: PTI photo

At Pirtand in Giridih assembly constituency Maoists posters asking the voters to boycott the polls had been removed, police sources said. Giridih registered 62.61 per cent votes, according to the EC.

Giridih is the second seat from where former chief minister and Jharkhand Vikas Morcha-Prajatantrik President Babulal Marandi are contesting. He also contested from Dhanwar, where polling was held in the third phase on December 9. Voters queue up outside a polling booth to cast their vote during the fourth phase of the assembly elections in Jharkhand. Over 13% of people had voted in the first two hours of polling

An FIR was filed against an activist of Jharkhand Mukti Morcha at a booth in Tundi constituency for allegedly taking a party banner inside the booth, a Dhanbad report said quoting the police.

Polling for the rest 16 seats in Jharkhand will be held in the fifth and final phase elections on December 20. Counting will be taken up on December 23 for the 81-member state assembly.

Source: PTI© Copyright 2021 PTI. All rights reserved. Republication or redistribution of PTI content, including by framing or similar means, is expressly prohibited without the prior written consent.
Related News: Giridih, Chandankyari, Sindri, Dumri, Madhupur
SHARE THIS STORY
Print this article 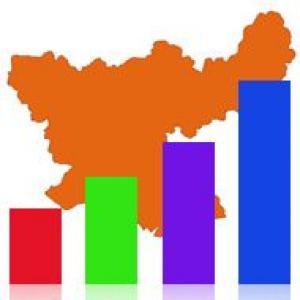